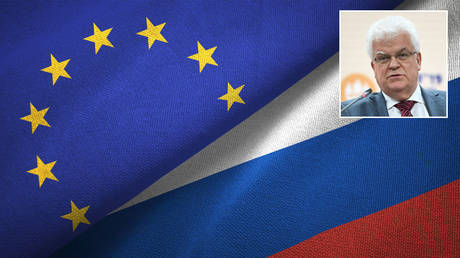 A fresh report on EU-Russia relations released by the European Parliament is a futile attempt to influence this weekend’s parliamentary elections in the continent’s largest country, Moscow’s top envoy to Brussels has alleged.

On Thursday, the bloc’s lawmakers approved a document outlining the EU’s relationship with Russia. It was prepared by former Lithuanian PM Andrius Kubilius and passed by a 494 to 103 vote, with 72 MEPs abstaining. It’s important to note that setting foreign policy is a function of member states and not parliamentarians in the Belgian capital.

Russia’s Permanent Representative to the EU Vladimir Chizhov blasted the report on Sunday, calling it biased, factually wrong and, in his view, aimed at swaying votes in the ongoing parliamentary elections in Russia. If that was the intention, nothing would come out of it, the diplomat predicted, saying that Russian people “are conscious and politically educated enough not to fall for such a move.”

“This entire resolution has this common thread that the government, the president, the parliament are all bad. And there are good democracy-thirsty Russian people, whom the MEPs want to direct toward the light,” he said.

I am certain that many in our country will find this hubris insulting to their intelligence and capacity for independent thinking.

Chizhov believes the adoption of the non-binding resolution was timed to coincide with legislative elections, which Russia is holding this weekend.

The EU report contains a laundry list of grievances it has toward the Russian government, some of which are simply factually untrue, according to the Russian envoy. For example, it states that “the collapse of arms control with Russia (e.g. withdrawals from the Intermediate-Range Nuclear Forces Treaty and the Treaty on Open Skies) and the lack of progress on nuclear disarmament…is of great concern for the security of European citizens.”

Also on rt.com EU must move quickly to push back against Russian & Chinese influence in Afghanistan or face being made IRRELEVANT – FM Borrell

Russia indeed abandoned the INF Treaty and the Open Skies treaty, but in both cases the US was the party that initiated the situation. Russia and the US significantly reduced their respective nuclear arsenals under the bilateral New START treaty.