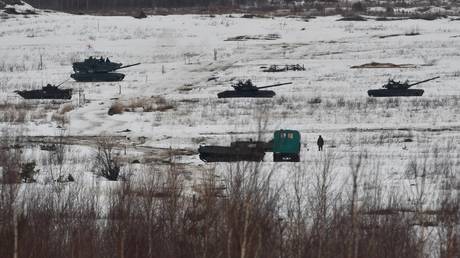 Moscow considers talks with the US and NATO “unsuccessful,” but there is no talk of military action, Kremlin spokesman Dmitry Peskov has said FILE PHOTO: Tanks are seen during Russian-Belarusian drills in central Russia in April 2021. © Sputnik / Konstantin Morozov

Russia has no plans attack Ukraine, but could not say it would never deploy any weapons in its large southern neighbor, the Kremlin has told CNN, adding that Moscow is willing to talk, but only if its concerns are addressed.

Dmitry Peskov, President Vladimir Putin’s long-time spokesman, added that Russia is deeply concerned by a recent spiraling-up of tensions in Europe, in an interview scheduled for broadcast on Sunday.

Read more:   Russia will join US in planning event on 20th anniversary of 9/11 attacks 'to commemorate victims of terrorists' – top diplomat

According to Peskov, the only way forward for the US and NATO is to finally address Russia’s concerns in earnest, instead of brushing them off. “This is the reason we are insisting on receiving a direct response,” he explained, adding that Moscow expected an “extremely specific” response to its “extremely specific proposals.”

Moscow is not issuing any ultimatums, he maintained, adding that the Kremlin was not, as of now, “speaking about military action.” Nonetheless, he said, Russia was not “going to say that we will not deploy any offensive weapons on Ukraine’s territory.”

Later, on Sunday, Peskov elaborated on what he had said about potential weapons deployment to Ukraine. Before any judgment was passed, he told Russian media, his statement needed to be understood in context, adding that a quote attributed to him by America’s Bloomberg was “their words.” RT was unable to access the full interview at the time of publication.

Stock exchange prices for gas in Europe increased by an average of 1.1%, which were…