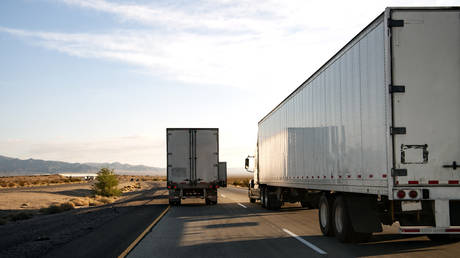 Russia has banned cargo transportation by road for companies from countries that placed similar restrictions on Russia. The decree was signed by Prime Minister Mikhail Mishustin and published on the country’s official internet portal for legal information on Saturday.

According to the document, companies from EU countries, Norway, Ukraine, and the UK will no longer be able to transport goods through Russia by road. The document states that the ban is in response to restrictions imposed by these countries for Russian truckers as part of the sanctions on Moscow earlier this year.

The decree comes into force on October 10 and will be valid until December 31, 2022. The document states that the ban applies to both bilateral and transit goods transportation, as well as cargo transportation to or from the territory of a third state.

“Goods delivery by road from ‘unfriendly countries’ to final recipients on the territory of Russia will still be carried out. For this purpose, goods from foreign trucks will be reloaded (or a semi-trailer will be hooked up) to Russian and Belarusian vehicles at the customs terminal complexes in the border areas in Pskov, Kaliningrad, Leningrad, and Murmansk regions, the Republic of Karelia and St. Petersburg,” the press service of Russia’s Ministry of Transport told RBK news outlet.

The decree exempts some goods, including various types of food, manufactured goods and certain non-food items. For instance, the ban will not apply to meat, fish, milk, some types of vegetables and confectionery, cocoa, certain cereal products, alcohol, tobacco, fertilizers, pharmaceutical products, contraceptives, paper, and cardboard. In addition, live animals and plants, watches, musical instruments, nuclear reactors, and video and sound recording equipment are not subject to the ban.

Cargo delivery to or from the Russian exclave of Kaliningrad will also be exempt from restrictions.