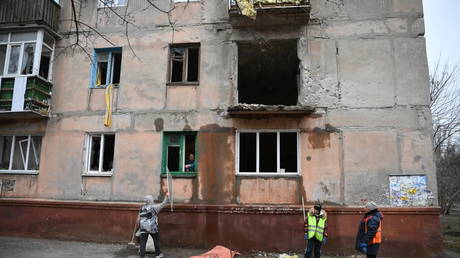 People change the glass in the windows in the house that was damaged as a result of the shelling in Gorlovka. ©  Sputnik / Ilya Pitalev

After suspending Moscow, the UN Human Rights Council sent a committee to Kiev to investigate alleged atrocities People change the glass in the windows in the house that was damaged as a result of the shelling in Gorlovka. © Sputnik / Ilya Pitalev

Ukraine called for a special tribunal to judge the Russian military and civilian leadership on Friday, after a report by a UN group accused Moscow of war crimes. The “Independent International Commission of Inquiry on Ukraine” was dispatched by the UN Human Rights Council after it suspended Russia’s membership, and while it worked closely with the government in Kiev, it had no contact with Moscow.

The three-member commission was led by Eric Mose, a Norwegian jurist who previously served on the European Court of Human Rights (ECHR) and presided over the International Criminal Tribunal for Rwanda.

Read more:   Foreign Minister: We hope the European Court will soon announce its position on Dilgam Askerov and Shahbaz Guliyev

Mose told the Council that the commission visited “27 towns and settlements,” inspected “sites of destruction, graves, places of detention and torture,” and “interviewed more than 150 victims and witnesses.”

After meetings with the Ukrainian government, “international organizations, civil society and other relevant stakeholders,” it concluded that “war crimes have been committed by the Russian Federation in Ukraine,” according to the minutes of the Council meeting. 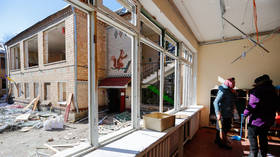 Mose accused some Russian soldiers of “sexual and gender-based violence crimes” and said the witnesses they interviewed “provided consistent accounts of ill-treatment and torture carried out during unlawful confinement.”

While “attempts to engage in a constructive dialogue with Russian Federation authorities had, regretfully, so far not been successful,” Mose described the cooperation with Ukrainian authorities as “very satisfactory” while fellow commission member Pablo de Greiff called it “indispensable.” De Greiff is a Colombian jurist who currently runs the Transitional Justice Program at the Center for Human Rights and Global Justice at the New York University School of Law.

While not quantifying the alleged instances of Russian war crimes, Mose mentioned just “two incidents of ill-treatment against Russian Federation soldiers by Ukrainian forces” and described them as “few in numbers.”

There was no representative of Russia at the meeting, since it was suspended from the Human Rights Council in April, at the insistence of the US. Ukraine’s representative, however, referred to the commission’s report to call for a Special Tribunal that would have jurisdiction over “aggression against Ukraine” and prosecute the senior political and military leadership of Russia.

Moscow has denied that its military was complicit in any crimes and has provided evidence to the UN of Kiev targeting and torturing civilians on a regular basis. (RT)