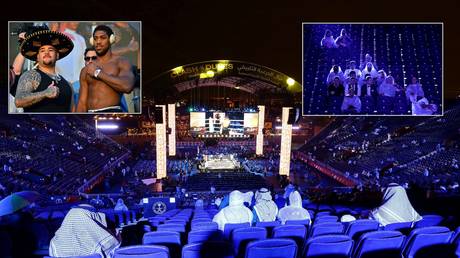 The blockbuster boxing event featuring the heavyweight rematch between Andy Ruiz Jr and Anthony Joshua could face disruption as rain hit the venue in Diriyah, Saudi Arabia, according to reports.

The card is already underway at the purpose-built 15,000-seater stadium, and while the ring is covered spectators are largely exposed to the elements.

Fans are taking cover under umbrellas as the rain falls, while there is reportedly a high chance that it will still be raining when Joshua and Ruiz start their ringwalks at around 9pm GMT.

While it would take a serious deterioration in conditions for the main event to be cancelled, according to reports the undercard could be affected while of more concern to organizers will be the chance of strong winds or even lightning. (RT)