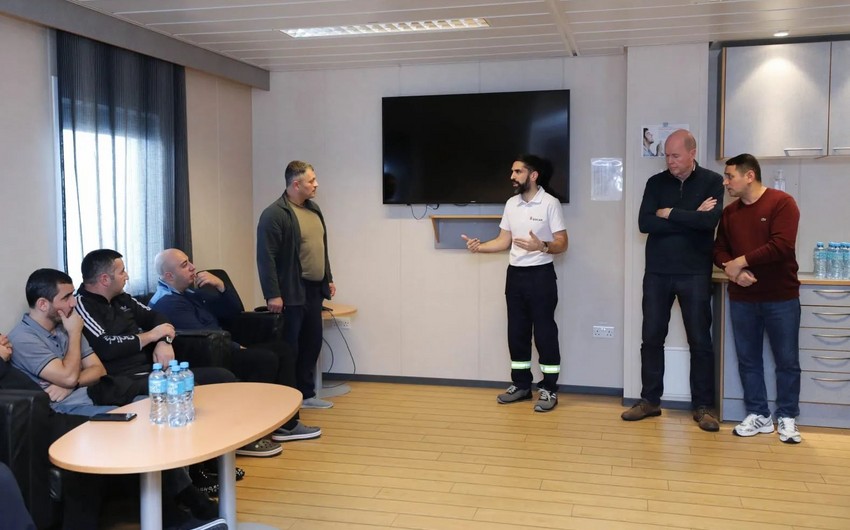 On 26 November 2022, a delegation led by Rovshan Najaf, President of the State Oil Company of the Republic of Azerbaijan (SOCAR), visited the bp-operated Shah Deniz Bravo platform, Report informs, citing a joint statement by SOCAR and bp.

The purpose of the visit was to get acquainted with the current operations and processes and to discuss the existing and future opportunities for the Shah Deniz Bravo platform which started up in 2018 as part of the second phase of development of the Shah Deniz field – one of the world’s largest gas and condensate fields.
As part of the visit, the SOCAR representatives met with the delegation led by Gary Jones, bp’s regional president for Azerbaijan, Georgia, and Turkiye. During the meeting, the SOCAR delegation was briefed about the second phase of development of the Shah Deniz field, current operations, modern processing, and safety systems, as well as future projects. Rovshan Najaf highlighted the strategic importance of the Southern Gas Corridor and emphasized the valuable contribution of Azerbaijani gas produced within the Shah Deniz 2 project to regional and European energy security.

The delegation then got familiarized with the platform production area, control room, and other facilities.

At the end of the visit, a group of bp employees received letters of recognition for their contribution to the safe and uninterrupted operations of the Shah Deniz Bravo platform.

Commercial gas volumes from the Shah Deniz 2 project – a major segment of the Southern Gas Corridor – are being delivered to Türkiye starting from 30 June 2018 and to European markets starting from 31 December 2020.