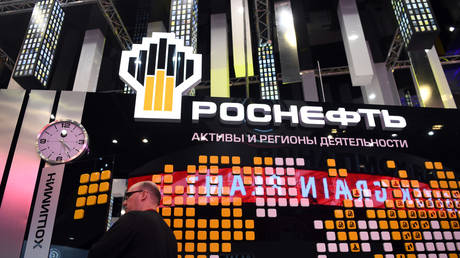 Russia’s biggest oil company Rosneft has reported a slump in revenue during the first nine months of the year, attributing it to the loss of its Germany-based refineries.

According to the company’s statement, net income in January to September totaled 591 billion rubles ($9.4 billion) and was 15% down from the record $11 billion reported by the oil firm in the same period of last year.

In September, Berlin took control of Rosneft Deutschland (RDG) and RN Refining & Marketing, the company’s German subsidiaries, putting them under trust management of the Federal Network Agency of Germany for six months. German officials claimed that the step was taken to keep three Rosneft refineries operational after critical service providers, insurers and banks allegedly refused to work with the sanctioned Russian company. Rosneft enterprises account for about 20% of oil refinery capacity in Germany.

Meanwhile, the Russian company’s oil sales to Asia saw unprecedented growth, as Moscow shifted its exports away from Europe. According to CEO Igor Sechin, Rosneft has “successfully optimized distribution channels: oil supplies to Asia grew by about a third and fully compensated for the decline in supplies to European buyers.”

Rosneft also said that its earnings before interest, taxes, depreciation and amortization (EBITDA) rose by 21.8%, reaching a nine-month record of 2.01 trillion rubles ($31.8 billion). Hydrocarbon production was also up by 2.2% in the reporting period compared to last year, and stood at 4.97 million barrels of oil equivalent per day.