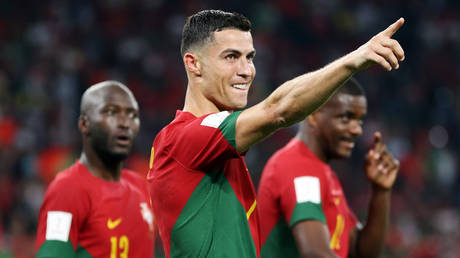 The Portuguese forward is without a team after leaving Manchester United Ronaldo is currently captaining Portugal in Qatar. © Sarah Stier / FIFA via Getty Images

Cristiano Ronaldo has been offered a $225 million deal to join Saudi Arabian club Al Nassr, according to a report by CBS. The 37-year-old is looking for a new club after his contract at Manchester United was terminated by mutual consent earlier in November.

According to the US news outlet, Al Nassr are ready to pay Ronaldo $75 million a year in a three-year contract that would see him playing into his 40s.

Ronaldo’s time at Manchester United came to an end with an explosive TV interview with Piers Morgan in which the footballer criticized numerous figures at Old Trafford, including manager Erik ten Hag and US owners the Glazer family.

According to CBS Sports, the Riyadh-based Al Nassr hope that Ronaldo “will be keen to break new ground” and move to the Middle East once he has completed his World Cup campaign with Portugal in Qatar. (RT)