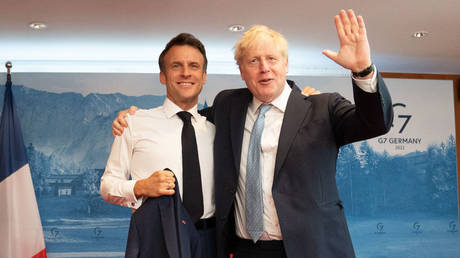 UK Prime Minister Boris Johnson was reportedly so infatuated with French President Emmanuel Macron’s idea of a “European Political Community” encompassing not only the EU but Eastern Europe – particularly Ukraine – and the UK that he has claimed it as his own idea and framed it as a modern take on the Roman Empire, the Financial Times reported on Wednesday.

Johnson’s modern Imperium would stretch from the UK to the Maghreb region of northern Africa and eastward to Turkey and Ukraine, he said, declaring he had come up with Macron’s idea “back when I first became foreign secretary” and revealing he believed “we should basically be recreating the Mare Nostrum of the Roman Empire” in an audience with journalists en route to Madrid for a NATO summit on Tuesday. Mare Nostrum was the Roman name for the Mediterranean Sea, adopted at a time when the empire controlled much of Europe, the coast of northern Africa, and modern-day Turkey, extending into the Caucasus region. (RT)