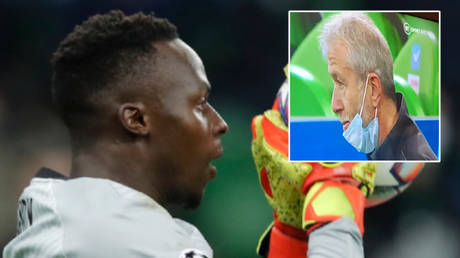 Edouard Mendy’s stand-out performance in goal has helped Chelsea ease to a 4-0 win at Krasnodar in the Champions League, with fans serenading the new signing on Twitter after he pulled off several excellent saves along the way.

Kepa Arrizabalaga, who became the world’s most expensive goalkeeper when he joined the Blues, had produced a series of errors in the weeks leading up to Mendy signing from Rennes on a five-year deal last month.

The relatively unknown stopper was hailed by his new boss, Frank Lampard, for “showing his quality” in the 0-0 draw against Sevilla that opened the club’s account for the season in Europe and ended a dismal defensive run.

Senegal star Mendy impressed even more at Krasnodar, thwarting Daniil Utkin’s fierce low strike with his fingertips to prevent the Premier League side from enduring a nightmare start to their tricky trip.

finally a chelsea keeper that can really save 🌝

Lampard says he hopes the manner of the victory made Abramovich happy. He didn’t get a chance to talk to the #CFC owner though.

After Jorginho missed his second penalty of the season by hitting the post, home goalkeeper Matvei Safonov delivered a howler by allowing midfielder Callum Hudson-Odoi’s strike from inside the penalty area to slip beyond him for the first-half opener.

Read more:   Azerbaijani citizens buy over 1,000 properties in Turkey in 2018

Chelsea owner Roman Abramovich was spotted in the stands alongside Krasnodar counterpart and fellow oligarch Sergey Galitsky, and the Russian businessman’s nerves would have jangled at the start of the second half.

Yury Gazinsky met a corner shortly after the break by volleying a shot into the turf, bouncing up and over Mendy’s grasp and onto the crossbar before Chelsea frantically cleared the danger.

Mendy’s determination almost resulted in him poleaxing Kurt Zouma as he collided with the defender during the resulting penalty area scramble, and his heroics were rewarded as depleted Krasnodar struggled to maintain the pace late on.

Another of Abramovich’s sizeable investments, Germany striker Timo Werner, had none of Jorginho’s troubles when presented with an opportunity from the penalty spot, smashing his emphatic spot kick beyond Safonov.

Edouard Mendy has been the real difference maker for Chelsea so far! So many times last season, we’d be dominating games & still would end-up 1-0, 2-0 down cause of the inconsistent goalkeeping performances! Keeping the scoreline 0-0 thanks to that brilliant save 🔥💙 pic.twitter.com/vZV6qJcGZq

Eduardo mendy will be the first African goal keeper to win the premier league title. Mark this tweet. #EPL#CFC

Hakim Ziyech then completed a slick team move with a finish into the far corner of the net from inside the penalty area on the left, beating a crowd of defenders with a precise shot.

Substitute Christian Pulisic added the fourth from close range late on to leave under-pressure Lampard and expectant boss Abramovich pleased with the first away match of a Champions League campaign that they are expecting to extend into the later stages.

Lampard spoke of his satisfaction after the victory but admitted that he had not spoken to Abramovich in person.

Fans were in no doubt who the star of the show was. “Finally, a Chelsea keeper that can save,” said one impressed viewer, applauding the 28-year-old goalkeeper.

“Genuinely, can somebody remind me of the last time a Chelsea goalkeeper won match of the match? Tears in my eyes,” gushed another. (RT)