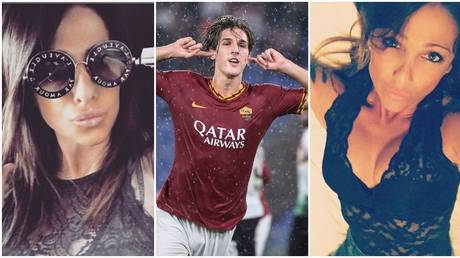 Roma midfielder Nicolo Zaniolo’s Insta-famous mother has responded to X-rated chants from rival fans, telling them “it’s better to be envied than to be pitied.”

Francesca Costa, 41, was the subject of abuse from Parma fans when they took on her son’s team in Serie A at the weekend, with chants translating as “Zaniolo’s mother is a wh*re.”

It’s not the first time the 20-year-old midfield ace’s mother has been targeted with sexist chants, but on this occasion Costa hit back with a message to her 3780,000 Instagram followers.

“To the sexist chants we answer with a smile. Always,” she wrote on her Instagram stories.

“It is better to be envied than pitied. Thank you, love. Explain to them that we laugh about this.”

She also thanked Roma fans for their messages of support, writing: “Your affection is truly touching and incredible.”

Highly-rated youngster Nicolo is the son of former footballer Igor Zaniolo, and joined Roma from Inter Milan in the summer of 2018, since scoring seven times in 38 games.

Last season he became the youngest Italian to net a Champions League double when he scored a brace against Porto.

Costa is quick to come to her son’s defense if she feels he’s been slighted, hitting out at Italian managerial legend Fabio Capello earlier this season when he reportedly warned another young player “not to follow in Zaniolo’s footsteps.”

“You’re an example for lots of youngsters who write to us every day chasing your dream and hope to be like you,” Costa wrote of her son.

“For me, you’re an example and should continue to be so – you’re not a path that should be avoided…

“I hope this campaign against you, which I can’t understand, doesn’t destabilise you. I love you.”

“Stop mum. What are you doing with your mouth like that? You’re 40!” the midfielder commented on one of Costa’s posts back in February.

Roma went down 2-0 in Sunday’s game, leaving the Giallorossi sixth in the table. Zaniolo set off for international duty after the match, and is in line to add to his four senior Italy caps in the upcoming Euro 2020 qualifiers against Bosnia and Herzegovina and Armenia. (RT)