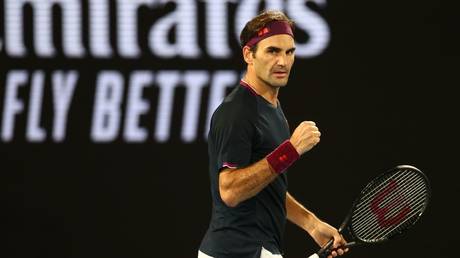 A speechless Roger Federer survived losing two sets and going a break down in the decider to avenge his US Open round of 16 defeat to John Millman in an epic fifth set tie-break to reach the fourth round of the Australian Open.

A first-to-ten tie-break – introduced by the tournament last year – was required to separate two players whose resolve, nerve and class had made for a compelling, highly unpredictable encounter.

Millman raced into a 3-0 lead, was pegged back and then capitalised on Federer missing the baseline with a shot to produce an ace for 5-2 in the decisive tie-break.

He was 8-4 ahead before losing two points on serve to bring the score back to 8-7, allowing Federer, remarkably, to make it 8-8 despite a serve that barely dropped over the net.

An incredible end to an incredible match 💪@rogerfederer | @johnhmillman | @AustralianOpenpic.twitter.com/Ztwyz6Ee0k

The Rod Laver Arena erupted as Federer won his sixth point in a row to secure a 10-8 victory over an understandably devastated Millner and sneak through to the next round.

“I can’t even speak any more,” admitted a hugely relieved Federer. “I was getting ready to explain myself in the press conference.

“The demons are always there. It came down to the wire. I had to stay so focused and take the right decision.

“John deserves over half of this one. He kept on coming up with the goods.”

“Thank god it was a super tie-break or I would have lost this one!”Roger reflects on his extraordinary #AusOpen battle with @johnhmillman 🎥: @Eurosport_UK | @rogerfedererpic.twitter.com/xNTmXfc4t5

The third seed recovered from losing his second service game to break back in the opening set, only to be broken again in the deciding game of the set after gifting Millman three break points with a double fault.

Millman, who had lost the first set before beating Federer in New York in September, took the first of his chances as Federer plunged a return into the net to go behind.

A tight second culminated in Federer finding the better form in the closing stages, storming the tie-break 7-2 to restore parity, despite increasing the notable of unforced errors he made in the first set.

The mistakes kept coming from the 20-time Grand Slam winner, who had made an incredible 43 errors by the end of the third set, which he won with a break in the final game to justify the frustration Millman had visibly shown at not converting his chances into a lead.

A crowd torn between the home player and one of the all-time greats might have expected Federer to find his irresistible groove after going ahead, only to see the balance swing between both competitors during another tight set.

Federer’s inability to find his range during the eighth game gave a break to Millman that he maintained to ensure a deciding set that proved just as dramatic.

Millman again broke Federer in his third service game, aided by a double fault and shot sent long from the 2017 champion, before surviving a break point, spurning a game point and finally being broken in the next game.

Millman earned two break points in the seventh game, but Federer recovered to hold as the clock ticked well beyond midnight in front of a tense crowd.

A 0-30 start to his ensuing service game gave Millman’s supporters the jitters before he held, and Federer charitably contributed another double fault to make it 30-30 in an unconvincing hold of his own. (RT)