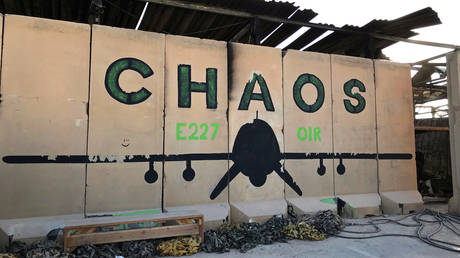 Blast walls of the sleeping quarters for US soldiers are seen at Ain al-Asad air base in Iraq. © Reuters / John Davison

At least two rockets have landed at the Ain al-Asad air base in western Iraq which hosts US and other international forces in the country, the Iraqi military said on Tuesday.

The attack resulted in no casualties, the military added, without revealing any further details of the incident.

None of the armed groups active in the country have so far taken responsibility for the strike on the base.

The Ain al-Asad base has been frequently targeted by rockets since the assassination of top Iranian military commander Qasem Soleimani in a US drone strike outside Baghdad airport in January 2020.

The rocket attacks have failed to inflict significant damage; however, in March an American civilian contractor at the base died after suffering what the Pentagon described as a “cardiac episode” while sheltering from incoming missiles. (RT)