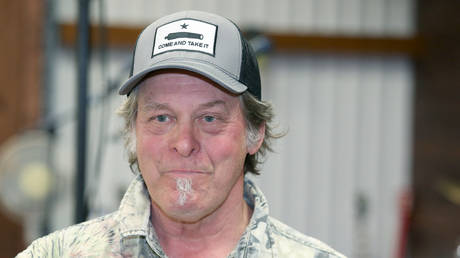 Conservative rock musician Ted Nugent announced in a livestream that he had tested positive for Covid-19, before calling the virus a Chinese “attack.”

In a Facebook Live video on Monday, Nugent said that although “everybody told” him that he “should not announce this,” he had been experiencing flu symptoms for the last ten days and felt like he was dying.

“I was tested positive today. I got the Chinese s**t,” he declared.

In case there was any doubt as to what virus Nugent was referring to, he reiterated that he “officially tested positive for COVID-19.”

Nugent then went on to call Covid a “Chinese virus attack,” before criticizing his doctors for testing him in the first place and giving a shout out to MyPillow founder and fellow Trump supporter Mike Lindell.

Also on rt.com China rejects allegations it did not properly share Covid-19 data with WHO researchers

Lindell is currently countersuing Dominion Voting Systems as the company sues him for claiming that the 2020 presidential election was rigged in Joe Biden’s favor through voting machines. Lindell was also banned from Twitter in January for claiming that the election results were manipulated, in a crackdown after Trump supporters stormed the US Capitol, and the MyPillow founder has since launched his own website called Frank. (RT)