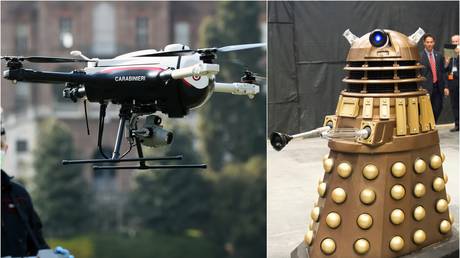 Italian police drone vs. Dalek: which would you rather have around during a pandemic? © Reuters / Massimo Pinca / Pool

As coronavirus lockdowns keep people indoors and physically distant from one another, robots are picking up the slack, doing the jobs humans can’t or won’t do — and keeping their erstwhile masters in line.

The sight of drones flying through cities shouting at residents to wear masks and maintain social distancing — already common during the early weeks of the epidemic in China — has become ubiquitous all over the world, with the airborne babysitters spotted everywhere from West Australia to Manhattan.

.@21WIRE .@velocirapture23 What kind of hell is this… Pinch me. This is in Western Australia. pic.twitter.com/pu2uOmsnzN

While admitting that “using drones with cameras and loudspeakers to fly around to see if people are gathering where they shouldn’t be” was perhaps “a little Orwellian,” drone manufacturer Impossible Aerospace’s Spencer Gore insisted “this could save lives.”

In locked-down Tunis, tank-like robots equipped with cameras have been spotted prowling the streets yelling at humans and demanding to see their authorization for being outdoors.

In Tunisia you must show your “papers” to patrolling robots if you are on the streets during their #COVID_19 lockdown!Get used to it people(or not!).#Agenda21#NWO#1984isTRUTH#auspol#Coronavirus#ChinaLiedPeopleDiedpic.twitter.com/71k8WhroaR

Unlike their flying cousins, however, videos posted to social media show they can be reasoned with.

Tunisia Police are using robots, which yell at people on the streets and tell them to go back home to enforce the “stay at home” order during the coronavirus lockdown. pic.twitter.com/pBqbblq3qo

Described as “rugged security robot[s] for multi-terrain applications,” the brawny bots are manufactured by Enova Robotics and come equipped with infrared cameras, GPS, laser telemetry, and an audio input so their controllers can lambaste targets remotely. What they lack in speed, they totally make up for in ominousness — though they don’t appear to be armed.

The Daleks have landed

Rather than hide the part they’re playing in imposing a police state, some robots have embraced the dystopian atmosphere of the lockdown. Residents of Robin Hood Bay in the UK were momentarily terrorized when a Dalek — an iconic alien villain from the Dr. Who TV series — rolled through their fishing village, its usual cry of “Exterminate!” replaced by “All humans must keep indoors! All humans must self-isolate, by order of the Daleks!”

Things are getting pretty serious. pic.twitter.com/OLc6egO9V5

While no one publicly admitted to ownership of the domineering Dalek, Scotland’s Tayside police retweeted the video, winkingly identifying the mysterious ‘bot as a “Direct Action Local Enforcement Kop” (DALEK).

When you need a robo delivery guy

Other bots seen out and about during the pandemic have more pedestrian uses. Broad Branch Market in Chevy Chase, Maryland began beta-testing boxy bots to make deliveries to customers living within a mile of the store. The low-riding six-wheeled white carts are adorably non-threatening and — to hear local media talk, at least — are even “bringing joy to the neighborhood.”

Morning muster of the delivery drones at our local market. #broadbranchmarketpic.twitter.com/qHU4tTGLzk

With delivery workers from Amazon, Whole Foods, Target, and Instacart having walked off the job in the last few weeks to protest working conditions, retailers are likely warming to the idea of deploying a shiny new fleet of obedient, reliable ‘workers’ who never get uppity and start demanding masks, gloves, and hand sanitizer. (RT)