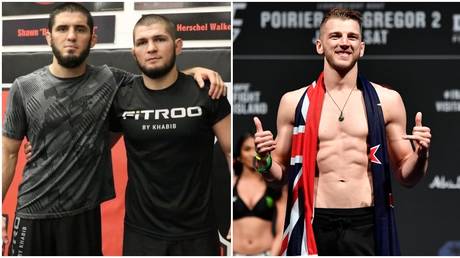 UFC lightweight contender Islam Makhachev should stop “copying the homework” of teammate and fellow Dagestani Khabib Nurmagomedov and “come up with something for himself,” according to Kiwi rival Dan Hooker.

Makhachev extended his winning streak to eight fights as he dominated Brazil’s Thiago Moises to earn a fourth-round submission victory in their main event in Las Vegas on Saturday.

The win further bolstered Russian’s claims that he is ready for sterner challenges towards the top of the 155lbs rankings as he eyes a path to a potential title shot.

Makhachev, 29, has used his moment in the spotlight to call out the likes of veteran force Tony Ferguson, Brazil’s Rafael dos Anjos and recent title challenger Michael Chandler – but has since traded blows online with New Zealand fan favorite Hooker.

Hooker, however, appears unimpressed by Makhachev’s latest outing, for which he again had retired former UFC lightweight champion Khabib as part of his coaching team.

“I kind of was watching on fast forward. I got bored,” Hooker told Submission Radio of the Russian’s win over Moises.

Hooker referred back to his classic slugfest with Paul Felder in Auckland back in February of 2020, suggesting that Makhachev had been angling for a showdown then but that he had no regrets at facing Felder instead.

“Coming into the main event of UFC Auckland, and I knew Felder was going to be the fight, and then Islam starts chiming in. So, I started having a bit of banter with him, saying that I would have to give away tickets to the event in the car park of Pak’nSave if I got booked with Islam Makhachev,” said the Kiwi.

“I can’t say I regret not going out of my way to fight Islam, to put on a five-round war in my hometown with Paul Felder, and if it would’ve been anything like he performed in his main event, that’s not the style of fight that the Kiwi fans want to see. They want to see two blokes go out there and really challenge themselves and see who’s better.”

Raised under the guidance of the late Abdulmanap Nurmagomedov, Makhachev perhaps unsurprisingly has earned comparisons to friend and now coach Khabib due to his oppressive grappling game.

But for Hooker, Makhachev is merely a poor imitation of the man who went 29-0 in his career before retiring on top last October.

“He’s on a good streak at the moment, but I believe he’s been knocked out in the UFC before. So then him copying Khabib’s homework and saying all this wild stuff when you’ve been laid flat in the octagon, it doesn’t really have the same ring to it as an undefeated fighter.”

Since edging his slugfest with Felder, Hooker has fallen to back-to-back defeats against Dustin Poirier and Michael Chandler, leaving him 3-3 in his past six octagon outings.

That was something Makhachev picked up on after he got wind of Hooker’s ‘homework’ comments.

“I have 8 fight winning streak, this guy is 3-3 in last 6 fights. I was looking to fight him year ago, but he was scared even mention my name. [Dan Hooker] wish you good luck in next fights, win something and we can talk,” wrote Makhachev.

I have 8 fight winning streak, this guy is 3-3 in last 6 fights. I was looking to fight him year ago, but he was scared even mention my name. @danthehangman wish you good luck in next fights, win something and we can talk. https://t.co/WxGcVkq15O

In response, Hooker suggested a September showdown between the pair.

“Scared haha check the timeline. I went to war with Felder and Poirier while you were cherping [sic]. Both make your fight Saturday look like a tickle party. If you have a problem, we can fight September,” wrote the 31-year-old, tagging Makhachev.

Scared haha check the timeline. I went to war with Felder and Poirier while you were cherping. Both make your fight Saturday look like a tickle party. If you have a problem, we can fight September. @MAKHACHEVMMA