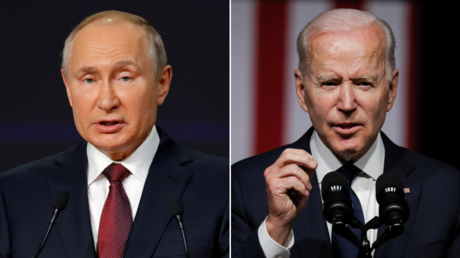 While Russia has conservative expectations for the upcoming meeting between Vladimir Putin and Joe Biden, the two countries could at least start working better where their interests align, the Russian president said.

The two presidents are set to have their first one-to-one meeting since Biden’s election, with a tense conversation likely at a low point in US-Russia relations. Moscow has made it clear that it has little hope that next week’s talks in Switzerland will lead to a breakthrough. At a minimum, however, it could lead the two countries to work together in areas where their interests align, Putin said.

The countries need “to create actual working mechanisms for cooperation on tracks that are of mutual interest to us,” he said in an interview with Russian TV shown on Sunday. These include “strategic stability, regional conflicts, global concerns about the environment.”

Also on rt.com By painting Russia as an enemy, Biden is now caught in a trap of his own making ahead of his crucial Geneva showdown with Putin

Relations between the US and Russia have been on the decline for decades, but took a nosedive during the Trump era. The former US president was relentlessly accused by his political opponents of being soft on Moscow or even secretly being controlled by the Russian government. His actual policies towards Russia were quite hostile, however, going beyond what his Democratic predecessor Barack Obama did.

Among other things, Trump sent lethal military aid to Ukraine and ended two Cold War-era treaties with Russia that placed restrictions on intermediate-range nuclear weapons and allowed trust-building through regular military inspections. Biden’s win allowed another key treaty, New START, to be salvaged. This limits the number of strategic nuclear weapons that the US and Russia can have.