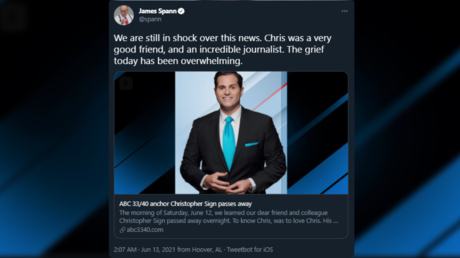 An ABC reporter, who in 2016 broke the news of a secret Phoenix airport meeting between ex-president Clinton and Loretta Lynch, who at the time was in charge of investigating his wife, has been found dead.

Christopher Sign, formerly a reporter with ABC affiliate KNXV-TV in Phoenix, was found dead on Saturday at his residence in Hoover, a suburb of Birmingham, Alabama. The city police are investigating the 45-year-old veteran reporter’s death as a suicide. Before moving to Phoenix, Sign worked for Birmingham’s ABC 33/40 station and in 2017 he returned to his former place of employment as an evening news co-anchor.

“We have lost a revered colleague whose indelible imprint will serve forever as a hallmark of decency, honesty and journalist integrity. We can only hope to carry on Chris’ legacy. May his memory be for blessing,” said Sinclair Broadcast Group Vice President and General Manager Eric Land. He expressed the group’s “deepest sympathy” to the family and friends of Sign.

I didn’t know Christopher Sign but I have his old work cell phone.I get texts, calls often from people thinking it’s him. Today I received a text from someone goodbye to him. 😭My condolences to his family, those who knew him. 🙏🏼 https://t.co/bygyQ0La6A

His former colleagues in Arizona were likewise saddened by the news. “Beyond his award-winning reporting, Chris had a welcoming way about him. He truly showed you he cared,” said ABC15 investigative reporter Dave Biscobing.

Sign worked in Phoenix for more than a decade and broke several big stories, including the one about Bill Clinton’s meeting with then-attorney general Loretta Lynch, which happened at Sky Harbor airport. He also authored a book expanding on the story, ‘Secret on the Tarmac’, which was published last year. (RT)