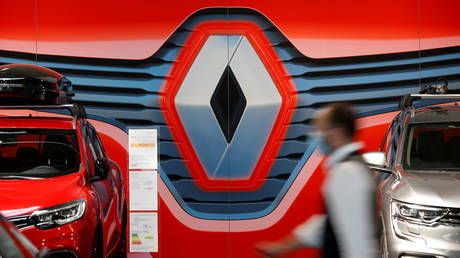 FILE PHOTO: A logo of Renault carmaker at a dealership in Nantes, France, May 26, 2020 © Reuters / Stephane Mahe

Workers have gathered outside the Renault plant in the suburbs of Paris after the company revealed plans to lay off 15,000 employees worldwide, with around a third of the cuts in France, as part of its €2 billion cost-saving plan.

The rally was held outside one of the company’s plants in Choisy-le-Roi on Friday. It comes just one day after people burned tires outside a Nissan facility in Barcelona to protest the plant’s closure. The two automakers are part of a longstanding alliance which also includes Mitsubishi Motors.

Earlier in the day, the French carmaker presented a draft restructuring plan containing measures including job cuts and lowering production capacity by almost a fifth. The cutbacks are intended to save Renault €2 billion over three years as it struggles to cope with the major crisis facing the automotive industry. The measures will affect just under 10 percent of the company’s global workforce – nearly 4,600 posts will be reduced in France, with more than 10,000 additional positions eliminated elsewhere.

“In a context of uncertainty and complexity, this project is vital to guarantee a solid and sustainable performance, with customer satisfaction as a priority,” Clotilde Delbos, Renault’s interim chief executive officer, said in a statement. (RT)

Oil prices eased on Friday, reversing earlier gains, as the resurgence of the coronavirus globally…

Precious metal prices up in Azerbaijan on July 1

The price of gold increased in Azerbaijan on July 1 compared to the previous price, Trend reports…

Wind energy, biofuels or solar energy could be the potential spheres for cooperation between Poland…

Port of Baku operates another cargo freight from China to Turkey