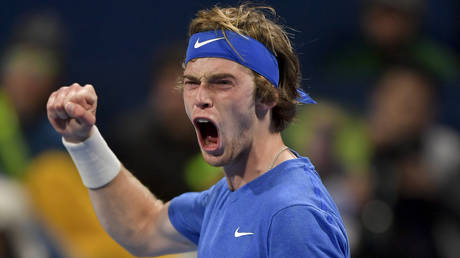 Russian ace Andrey Rublev continued his blistering start to 2020 by winnig the Adelaide International, making him the first man in 16 years to claim back-to-back titles in the opening two weeks of the tennis season.

Rublev is unbeaten in his last 12 matches, including an unblemished 8-0 start to 2020 as he gains serious momentum heading into the season-opening Grand Slam in Melbourne next week, where he is seeded 17th.

UNDEFEATED 💥@AndreyRublev97 wins his second title in as many weeks with a 6-3 6-0 win over Lloyd Harris.#AdelaideTennispic.twitter.com/xGrVyog7VO

Rublev’s win at the inauguaral tournament in Adelaide makes him the first man to win two titles within a fortnight at the start of the season since Slovakia’s Dominik Hrbaty back in 2004.

Re-writing history 👏@AndreyRublev97 becomes the first player to win singles titles in the opening two weeks of the season since Dominik Hrbaty in 2004.#AdelaideTennispic.twitter.com/QBYMgU5zpa

Rublev has largely picked up where he left off last season, when he produced some blistering displays in Russia’s run to the semifinals at the Davis Cup at the end of November.

Indeed, the second part of 2019 saw the reemergence of a man plagued by injury for large spells of his fledgling career, even sending him as low as 115 in the world rankings.

That began to change with an eye-catching win over Roger Federer at the Cincinnati Masters back in August, before Rublev tasted title success on home soil by winning the Kremlin Cup in Moscow in October.

His victory over Federer in the round of 16 in Cincinnati impressed the Swiss legend so much that he has tipped Rublev as one to watch from among the emerging young crop in 2020. (RT)

The World Health Organization (WHO) no longer has a process for declaring a pandemic, but…