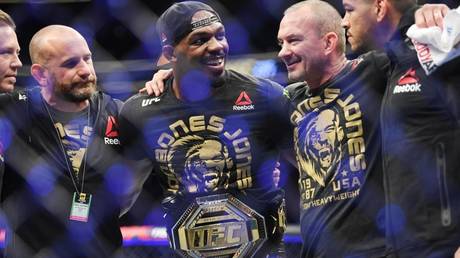 The UFC is back up and running, but they’re not at full speed just yet, with COVID-19 still affecting the UFC’s ability to host big fights. RT Sport takes a look at the seven UFC weight classes currently in need of a kick-start.

The UFC is hosting regular events Stateside, following their eight-day triple-header in Jacksonville, and their newly-sanctioned return to their home in Las Vegas.

But while hosting events in Sin City may allow US-based athletes the chance to get back up and running again, a huge portion of the UFC’s roster – including a number of champions – reside outside of the United States.

With travel restrictions and social distancing regulations still making it tricky for athletes to travel internationally – and safely – during the pandemic, the likes of Khabib Nurmagomedov, Alexander Volkanovski and Israel Adesanya are unable to travel easily to the States to fight.

But the arrival of “Fight Island” could prove the spark the UFC is looking for, with the location set to open the door to more international fights – and potentially more UFC champions.

As things currently stand, the UFC’s 12 weight classes are in a state of flux, with vacant titles, stayaway champions and international belt-holders who are unable to travel freely to defend their belts.

Here, we take a look at seven UFC weight divisions currently at a standstill during the coronavirus pandemic, and how things might get moving in each one.

The UFC’s lightest men’s weight class has no active champion after the promotion’s attempt to crown a new champion failed thanks to Brazilian contender Deiveson Figueiredo missing weight for his title fight with fellow challenger Joseph Benavidez in February.

Figueiredo’s missed weight meant he couldn’t win the belt, though Benavidez still could. But the Brazilian ensured the title remained vacant with a second-round stoppage after a nasty clash of heads between the pair left the American dazed and vulnerable to the finish.

What’s next? The UFC has rebooked Figueiredo and Benavidez to face off for a second time on July 18 in a bid to get the division back on track again.

Henry Cejudo defended the UFC’s 135-pound title at UFC 249 when he finished former champion Dominick Cruz to cement his status as the best bantamweight on the planet. But then he shocked the world – and possibly the UFC – by announcing his retirement during his post-fight interview. It means the 135-pound strap is up for grabs once again.

What’s next? UFC president Dana White has said the battle for the newly-vacated title will feature “Petr Yan and somebody,” and it subsequently emerged that the “somebody” could well be former UFC featherweight champ Jose Aldo. No date has been set for the fight, however.

“Alexander The Great” may be ruling over the UFC’s 145-pound division right now, but he’s currently Down Under in his Australia home, meaning he won’t be able to fight until Fight Island gets up and running at the end of the month.

What’s next? A rematch between Volkanovski and former champion Max Holloway may be the UFC’s most likely route to get the division up and running again, but with a group of contenders including Brian Ortega, Zabit Magomedsharipov, Chan Sung Jung and Yair Rodriguez all pushing for a title shot, the UFC’s matchmakers aren’t short of options when booking the next title fight at 145.

To say things have been turbulent for Khabib would be a colossal understatement. After four prior bookings, the Russian superstar finally looked set to meet Tony Ferguson, but the COVID-19 outbreak, plus a few logistical mistakes, left the champion in Dagestan and the fight in Jacksonville. Then, Khabib’s father fell critically ill and into a coma. It’s meant the lightweight title has had to take a distant back seat while Khabib looks after his family.

What’s next? A clear top contender has emerged in Khabib’s absence, with Justin Gaethje stepping in and defeating Tony Ferguson to become the interim champion. A title unification bout is the only fight that makes sense for the 155-pound division. But with Khabib’s difficult situation at home, the UFC may have to play things carefully and wait until “The Eagle” is ready to come back.

“The Last Stylebender” was on his way to becoming one of the biggest stars in the sport when the coronavirus pandemic put the sport – and his career – on pause. And while the UFC has managed to get things up and running Stateside, the Nigerian-born Kiwi has been back home in Auckland, New Zealand and unable to travel. However, few countries seem to have handled the pandemic as effectively as New Zealand, and the doors may soon be open for Adesanya to take to the skies again. Whether it’s on “Fight Island” or Stateside, the UFC may call upon their spectacular middleweight champion pretty soon.

What’s next? A date on “Fight Island” seems likely, with Adesanya likely to face the man he was lining up to fight before the pandemic, hulking Brazilian Paulo Costa. It’s the sort of fight that will capture the imagination of fight fans, wherever it’s held, and would put one of the UFC’s most exciting stars back on our screens once again.

Sure, Jon Jones is based in the United States, but his recent spat with the UFC has placed major doubt over his next move. He seemed keen on a move to heavyweight to fight Francis Ngannou, but that wish quickly turned into a war of words between Jones and UFC president Dana White, with accusations of lies being thrown around and Jones stating his willingness to walk away from the UFC light heavyweight title – and the UFC itself. It seems thing have hit an impasse for now, but hopefully things can be smoothed over and we see “Bones” back in action once again.

What’s next? Nothing, until a consensus can be reached and a path forward can be agreed. Assuming Jones does fight again, it’s a case of whether the UFC makes his move to heavyweight worthwhile. If they do, get ready. We’ll have one of the biggest fights of the year on our hands. But if they don’t, Jones could simply stick at 205 and face either Dominick Reyes or Jan Blachowicz. Both are worthy contenders, but Jones’ dominance at 205 has been so strong, fans would surely be more excited at a move up to face the big boys. But if things drag on too long, don’t be surprised to see the UFC book Blachowicz vs Reyes for a belt – possibly an interim title – while they look to finalize things with Jones.

While the UFC has an issue with Jon Jones, they also have a problem with heavyweight champ Stipe Miocic – and this one is a much trickier one to deal with.

Miocic is a firefighter and paramedic in Ohio, and has maintained his day job throughout his UFC career. And now, with the nation needing its first responders more than ever, Miocic has claimed that he won’t return to action until things have settled down and he’s able to train properly.

Given his line of work, it’s hard for the UFC to rail against Miocic’s stance, but it doesn’t help the heavyweight division too much. Daniel Cormier wants his trilogy fight with Miocic before retiring, and there’s the terrifying presence of Ngannou waiting in the wings for whoever’s left standing.

What’s next? The UFC will likely sit tight and try to coax Miocic back into action by the fall, where a huge fight with Cormier awaits. Regardless of the result, don’t be surprised if both men end up retiring at the end of it, leaving a vacant title and an open spot for a brave soul to step up and face Ngannou for the belt by the end of the year.