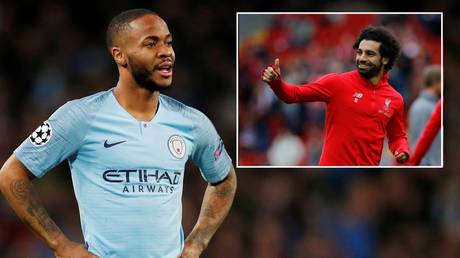 In an alternate timeline Raheem Sterling could well have been lining up alongside African star Mohamed Salah in Jurgen Klopp’s all-conquering Liverpool, and this is something which would apparently have delighted his daughter.

Sterling could be forgiven for wanting a little respite from his former club this season, given how Liverpool are all but certain to wrestle the Premier League crown from Manchester City and have reached two Champions League finals (winning one) in the last two years – an achievement which has eluded Sterling since he signed up to join the blue half of Manchester in 2015.

But, as he told AS, his eight-year-old daughter Melody Rose Sterling didn’t quite switch allegiances following her father’s big-money transfer five years ago, and takes great pleasure in trolling her dad with songs hyping the talents of Liverpool’s chief creative force Mo Salah.

“She has my sort of personality and she likes to banter and chant Mo Salah’s songs to me,” Sterling said.

“She knows the rivalry between Liverpool and the team that I play for so she’s always singing their songs and trying to wind me up but that’s just her personality.”

Sterling became the most expensive English player in history when he made the switch from Liverpool to Manchester City (since eclipsed by Harry Maguire’s transfer from Leicester to Manchester United) and it appears to have been money well spent, as Sterling as risen to become one of European football’s most consistent attacking talents.

And despite his team falling considerably behind the Anfield outfit this season, Sterling says that he relishes the tongue-in-cheek banter with his daughter.

“Football takes up a lot of your life but at the end of the day when things get rough or tough that is what makes you happy,” he explained.

“Seeing your kids is possibly the most important part of your day. They take away everything else that’s going on outside and you can block that out, so when I go home, everything seems perfect.” (RT)