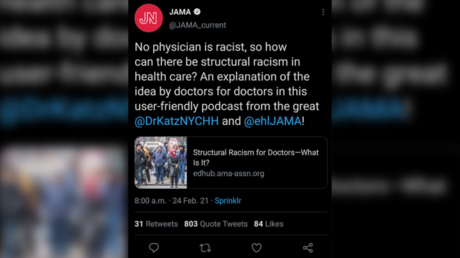 A provocative tweet aimed at drawing in listeners to a podcast discussing ‘structural racism’ has backfired spectacularly with the Twitter mob calling for blood, days after the message was taken down and an apology issued.

The ill-advised, offending tweet from the Journal of the American Medical Association boldly stated: “No physician is racist, so how can there be structural racism in health care?”

In case anyone missed the extremely bad tweet: pic.twitter.com/0RN6aoQuN8

The promoted podcast in question was produced by two white doctors, a deputy journal editor and a physician who runs a New York City health system, and was ostensibly aimed at examining how structural racism worsens health outcomes for patients and how healthcare systems can address and overcome the problem.

The organization’s top editor, Dr. Howard Bauchner issued a public apology on March 4 but the backlash continued, with many doctors and medical professionals saying the JAMA board needs a “serious overhaul.”

I missed the part where you pledged you would include Black and Indigenous physicians who are unrepresented in the senior editorial staff, and that you would feature experts who have experience with DEI initiatives in further editorial and educational platforms on JAMA.

The American Medical Association, which owns and publishes JAMA but exercises no editorial control over it, called the podcast “wrong, false and harmful.”