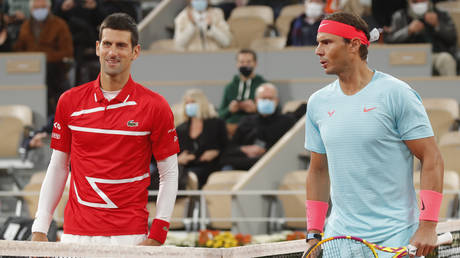 Rafael Nadal, the world’s number two tennis player, has appeared to hit out at Serbian rival Novak Djokovic after he suggested that quarantine conditions should be eased for players preparing for the Australian Open.

Nadal becomes the latest figure within the sport to turn on the top-ranked Djokovic after he had petitioned the sport’s authorities to reduce the isolation restrictions for some players in advance of the tournament.

Also on rt.com ‘Djokovic is a tool’: Nick Kyrgios slams complaints from quarantining stars as Tomic’s girlfriend is forced to ‘wash own hair’

Nadal and Djokovic are currently in Adelaide completing isolation requirements in advance of their return to tennis at an exhibition event before the Australian Open.

However, uproar was caused in the tennis community after 72 top players were forced into a hard lockdown after potentially being close contacts of a confirmed case of Covid-19 while traveling on flights to Australia.

Djokovic penned a list of suggestions after he and several others were upset at the requirements imposed on fellow players put in place to help stop the spread of Covid-19 in Australia.

Several top players such as Djokovic were able to quarantine with access to tennis courts while others hardest-hit by the measures were forced to remain inside hotel rooms for 14 days with no prospect of practice.

The issue also ignited a separate media frenzy when Bernard Tomic’s Instagram influencer girlfriend Vanessa Sierra, who was also required to undergo isolation, complained of a lack of comforts being supplied – which included an online vlog about how she was being forced to wash her own hair for what she said was the first time in her life.

Nadal, meanwhile, was criticized for staying silent on the issue. Fellow Spaniard Guido Pella announced last week that, “Djokovic’s balcony is bigger than my room. But at least he said something.”

He added that he was surprised at the silence of both Nadal and Dominic Thiem.

Also on rt.com Branding Novak Djokovic a ‘tool’ for daring to discuss player welfare at the Australian Open is unfair and at odds with reality

But in a response to the matter told to ESPN, Nadal defended himself and seemed to take a subtle pot-shot at Djokovic.

“Some need to make public all these things they do for others, some of us do it in a more private way without having to publicize everything,” he said.

“The calls we make to help the most disadvantaged players, some of us don’t need or want to advertise it.

“It is understandable, respectable. Where is the line of privileges? I have a different view. Here in Adelaide our conditions have been better than most of the conditions in Melbourne, but some Melbourne players have larger rooms where they can perform physical activities, others smaller rooms where they cannot have contact with their coach or physical trainer. Where is the line? It is a matter of ethics, of which each one has his opinion.

“There has been talk that Adelaide people have better conditions, but I have not heard from any Melbourne player that some have much better rooms than others.

“At the time of talking about fair play or equal conditions, people don’t tend to complain about the position of those who are worse off than them. In the end we all try to get the most out of our possibilities and help each other.”

It was reported last week that a number of isolating players had launched a “revolt” against the conditions and the mandatory quarantine which comes as Australia continues to record positive results due to their aggressive stance on combating the spread of the virus.

Per official stats, just 11 cases of Covid-19 were reported in recent hours, along with zero deaths. The country has nearly 29,000 confirmed cases since the pandemic began, with 909 deaths being officially tabulated.