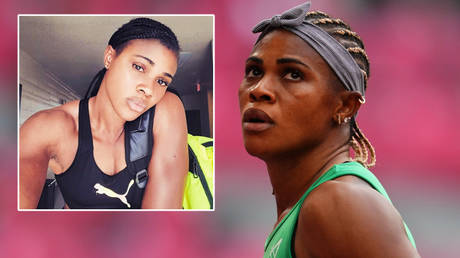 100m star Blessing Okagbare will not be challenging the likes of British record holder Dina Asher-Smith in the semifinals at the Olympics on Saturday, with doping chiefs handing her a provisional suspension over a growth hormone.

Self-declared “queen of the track” Okagbare was due to race for a place in the final in Tokyo, and the six-time African Championships winner had voiced her excitement and thanked god for her place at the Olympics earlier this week.

The long jump silver medalist at the Games in 2008 and current holder of the African 200m record has now been ruled out of her latest shot at glory after the Athletics Integrity Unit announced it had detected the growth hormone – a substance on the World Anti-Doping Agency’s Prohibited List – in an out-of-competition test earlier this month.

Lab officials told the unit about the result on Friday, and Okagbare was informed that she would not be allowed to compete just hours before the semifinal on Saturday.

First doping story of #Tokyo2020 involving positive test. And it’s a big name in Nigerian sprinter Blessing Okagbare. She’d already started 100m and was due to run in semi finals later today. Now suspended and will be scratched from start list. #Olympicspic.twitter.com/rWfGaZbARf

Okagbare would have taken on the likes of Asher-Smith and the fastest woman of all time, Jamaica’s Shelly-Ann Fraser-Pryce, in her bid to move a step closer to a medal.

The hugely experienced 32-year-old won 100m gold at the Commonwealth Games in 2014 – the same year in which she married former Nigeria football international Igho Otegheri – and has also won a string of honors in relay racing.

Read more:   WHO office in Azerbaijan talks coronavirus spread via coins or banknotes

Her 200m individual semifinal berth would have been her first since the World Championships in Doha in 2019, when Okagbare was disqualified for lane infringement.

“If courage has a face, it is this woman right here,” she told her Instagram following of almost 30,000 recently.

“The energy you give and receive is contagious so, be mindful when spreading words.” (RT)