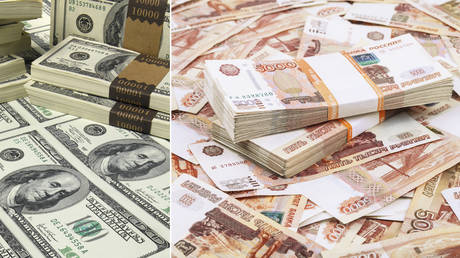 The Eurasian Economic Union (EAEU), an analogue to the EU in the post-Soviet space, should begin using its own currencies in trade, rather than the Euro and Dollar, which dominate commerce between the member states and China.

That’s a consensus agreed upon at a virtual forum on Monday, dedicated to integrating the five EAEU member states with China’s flagship foreign policy initiative, ‘One Belt, One Road’. Founded in 2010, The EAEU is made up of Armenia, Belarus, Kazakhstan, Kyrgyzstan, and Russia, and in recent years has actively sought a closer relationship with Asia, especially Beijing.

Read more:   Fans rip into 'smiling' Zverev after he ends week of domestic abuse allegations with defeat to Medvedev

According to Glazyev, moving away from the world’s two most-traded currencies is not about “separating politically,” but instead protecting EAEU member states’ economies from a situation they have no control over.

In the first quarter of 2020, trade between Russia and China in dollars fell below 50 percent for the first time to 46 percent, a significant decrease from 75 percent in 2018. In 2015, the share of the American currency in bilateral transactions between Moscow and Beijing was even higher – at 90 percent. However, despite movement away from the dollar, foreign currencies still dominate trade between the two Eurasian superpowers.

The dollar’s reduced role in international trade can mainly be blamed on the ongoing trade war between the US and China. Beijing’s turn away from Washington has also coincided with the Kremlin’s de-dollarization policy, which began back in 2014 as a result of Western nations imposing sanctions on Moscow over Crimea.