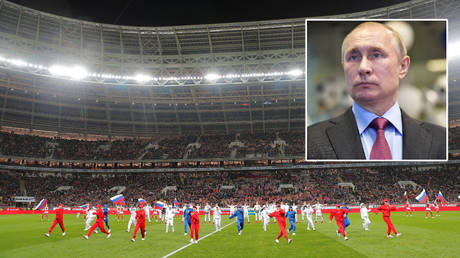 Russian president Vladimir Putin has spoken out against proposals to drop the foreigner limit rule in place at elite clubs, warning that his nation will be sidelined on the international scene if the restrictions are dropped.

The debate around the limit, which allows for a maximum of eight overseas players to be included in clubs’ 25-man squads, has come under increasing scrutiny as clubs and high-profile figures ponder ways to strengthen the national team and improve upon underwhelming performances by Russian clubs in Europe.

Speaking at a meeting of the Council for the Development of Physical Culture and Sports, the football-loving head of state pointed to Russia’s 23-year absence from Olympic football since the Soviet Union claimed gold in 1988.

“I heard again recently: let’s remove the quantitative restrictions on the participation of foreign athletes [at clubs],” said Putin, publicly entering the discussion that has escalated since Russian Football Union (RFU) president Alexander Dyukov confirmed that the organization had suggested completely removing the limit for the Russian Premier League’s 16 teams last month.

“Well, great: do you not know that since 1988, our national team has not played at the Olympic Games? It will be another 20 years if it’s only foreigners playing in our teams.”

Dyukov had pointed out that more ‘legionnaires’ – the term used to describe the foreign contingent in squads – played in 2008, when Russia reached the EURO semifinals, than last season.

The majority of clubs reportedly backed a compromise which would allow them to include 10 foreign players in a 25-man squad during a vote on the same day Dyukov spoke.

Rubin Kazan were said to have been one of a minority of clubs to have wanted the limit scrapped.

“I am for the immediate cancellation of the limit – I think that in the current format, the limit is harmful to our football,” Rubin’s general director, Rustem Saimanov, told sports.ru.

“All 16 clubs are in favor of canceling the limit, but with some time intervals. Because many, based on the current limit, made their development strategies; contracts were signed with legionnaires, so it is difficult to switch to a complete cancelation.

“In my opinion, when we voted, half of the clubs voted for the complete cancelation of the limit and the other half for the cancelation within a certain period of time.

“Everyone has tried the current limit; everyone admits that it is unsuccessful. For example, there was ‘6+5′ [a maximum of six foreign players in a team], then there was a wide discussion of the ’10+15’ format – everyone agreed with it.

“Then the Ministry of Sports said no, but it is not directly involved in football, right? Therefore, then it was decided by the bureau of the executive committee of the RFU on the [current eight-player limit] format.

“And now, if you look at the statistics, there are no more legionnaires on the field – there are fewer of them than with [a six-player team limit]. But then the clubs had the opportunity to take 10 players into the application.

Do you understand that the Limit will be abolished? Reads more, that the proposal was made, No more, no less. Last week there was a rumor, that the majority of the clubs are against abolition…

Thats buIIshit cause only 2 clubs are against it

“We need to look among the Russians, but unfortunately we do not have so many high-class Russian footballers – this is also not a secret, right?

“It needs to be revised. This is unambiguous, I really hope that the Ministry of Sports, together with the RFU and RPL, will look at the numbers and make the right decision.

“And besides, a good Russian footballer, regardless of the limit, will still be on the field, that’s for sure. And those who do not [play], who are sitting in the reserves in the RPL, they will go down to the [lower divisions] FNL, and the FNL will become stronger.

“The situation in the FNL will improve, this championship will be as strong as before. Then the players will go up from there.”

All eight foreign players within a squad are allowed on the pitch at once, with payers from countries in the Eurasian Economic Union (EAEU) – Russia, Armenia, Belarus, Kazakhstan and Kyrgyzstan – not subject to the restrictions.

Shouldn’t they make a change in the FNL limit as well in this rate? No limit to 4 foreigners is a drastic change when you go down.

Personally following (moreover of RPL) leagues with foreign limits,I think a middle ground should be found.I support relaxed laws but there has to be a limit at a certain extent for reasons.The solution to all of this mess is a better formation of footballers though. https://t.co/CVW0l0jd03

“Saimanov said that all 16 clubs voted to cancel the limit? Rostov definitely didn’t vote for that,” he insisted.

“We made a proposal to consider this issue by a working group. Based on the results of its work, a proposal would be developed which the RPL would put to the RFU.

“Therefore, we cannot now say that all 16 clubs unanimously supported the abolition of the limit.”

Former Russia and Spartak Moscow midfielder Yegor Titov emphatically disagrees with Putin on the issue but believes that other reforms should be considered.

“The limit killed an entire generation,” said the 47-cap international. “There were promising guys but they understood: they have a passport, a good salary, they don’t have to work. Many simply disappeared.”

Titov feels the issue is down to money “simply falling” on players at an early age and wants a salary limit similar to the one imposed by the Kontinental Hockey League – which caps club wage bills at around $13 million per season – to be introduced.

“Smart people are sitting upstairs [at clubs], I want to believe,” he said. “They will make the right decision and our football will slowly, in small steps, come out of this pit in which it has been for a very long time.

“Now is the peak of the fall. Of course… we need to change something in our football.

“Changing the championship system… there will be more matches between Spartak, CSKA [Moscow] and Zenit [St. Petersburg].

“We will be able to sell our product abroad and the clubs will start making money. More fans, more merchandise sales, more expensive tickets.”

Putin’s press secretary, Dmitry Peskov, emphasized that the final call would be left to the footballing authorities. “This is an expressed opinion,” he told Sport Express of the president’s views. “The decision is for the RFU.”

Zenit boss Sergei Semak wants the limit to be canceled from the 2022/23 season and says that bosses at his club agree with him. “I think this measure will be beneficial at this stage of the development of our football,” he told RIA. “For clubs in Europe, it will be a small plus.”

Semak’s side start their bid to make a long-awaited return to the knockout stages of the Champions League on Tuesday.

The reigning RPL champions head to Chelsea in their opener, and they will need to eclipse the Premier League hopefuls, Italian heavyweights Juventus and Swedish underdogs Malmo if they are to reach the last 16.