President Vladimir Putin has issued an order placing the formerly Ukrainian Zaporozhye power plant under Russian management. A presidential decree on the fate of Europe’s largest nuclear facility was published on Wednesday.

The facility will be operated by a subsidiary of Russia’s state-owned nuclear power giant Rosatom. For now, the facility will continue to function under Ukrainian-issued licenses until it obtains Russian-issued equivalents, according to the decree.

The move comes as Moscow finalizes the accession of four formerly Ukrainian regions – Zaporozhye, Kherson, as well as Donetsk and Lugansk People’s Republics – to Russia. The territories overwhelmingly backed a proposal to join Russia in referendums last month. The votes were firmly rejected by Kiev and its Western backers, who denounced them as “sham” votes.

Read more:   Everyone, take a knee! Watch newly-adopted way of demonstration spread all over the globe

In recent weeks, Zaporozhye nuclear power plant has been subjected to repeated missile, artillery and drone attacks, attributed by the Russian military to Ukrainian forces, as well as targeted by saboteurs in apparent attempts to seize the facility from Russian forces. Kiev, along with multiple Western officials, however, has been blaming Moscow for shelling the nuclear facility it controls. 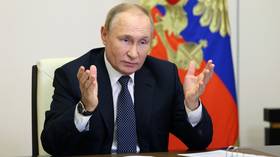 The Zaporozhye plant was seized by the Russian military early in the ongoing conflict. Until now, however, it has remained under Ukrainian management.