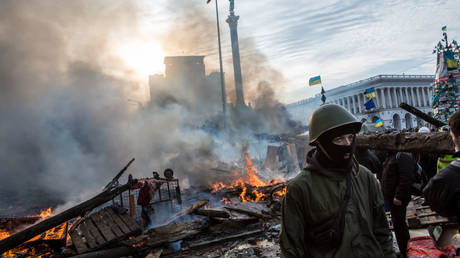 File photo: Anti-government protesters walk amid debris and flames near the perimeter of Independence Square in Kiev, Ukraine, on February 19, 2014. ©  Brendan Hoffman/Getty Images

None of this would have happened without the 2014 coup in Kiev, the Russian president explained File photo: Anti-government protesters walk amid debris and flames near the perimeter of Independence Square in Kiev, Ukraine, on February 19, 2014. © Brendan Hoffman/Getty Images

The ongoing conflict in Ukraine could have been avoided had there not been a coup in Kiev in 2014, Russian President Vladimir Putin said on Friday. Speaking to mothers of Russian soldiers, Putin stressed the Maidan turmoil resulted in direct Western control over Ukrainian institutions, via overt neo-Nazis, which Russia has no choice but to oppose.

At the turn of the century, Russians were told everything would be great if they accepted outside control, and started “playing on someone else’s field,” Putin said. It was those outsiders seeking to control Russia that have created the current situation, “including in the zone of the special military operation,” he added.

Without naming the West specifically, Putin said the outsiders had significant influence in Ukraine as well, but after 2014 they gained total control over that country.

I understand that we have not gathered here for serious discussions on political issues, but still, if there had not been a coup d’état in Ukraine in 2014, none of this would have happened. Simply none of it.

The US “midwifed” the Maidan protests, in the infamous words of Deputy Secretary of State Victoria Nuland, resulting in Ukrainian nationalists seizing power in February 2014. Putin described them as “open neo-Nazis” who glorify WWII Nazi collaborator Stepan Bandera, killer of Russians, Poles, Jews and “everyone down the line, on Hitler’s orders.” 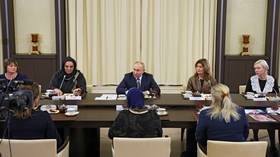 “That’s who, that’s what, our boys in the zone of the special military operation are fighting,” the Russian president said. He argued that many Ukrainians opposing them “do not even understand what they are doing” or realize they are being used as someone else’s pawns.

“They are playing someone else’s game, but we have to fight for our interests, for our people, for our country. And that’s what we’re doing,” the Russian president said.