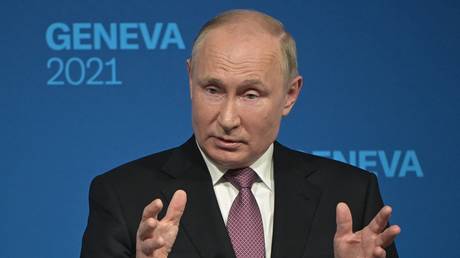 Russian President Vladimir Putin speaks during a news conference following a meeting with his US counterpart Joe Biden at the Villa La Grange in Geneva, Switzerland. © Sputnik / Sergey Guneev

Russian President Vladimir Putin has questioned America’s contemporary moral authority when it comes to human rights. He was speaking to journalists after the summit with his US counterpart, Joe Biden, in Switzerland on Wednesday.

Putin was asked by American reporters whether his government was engaging in a “crackdown” against domestic opposition, and whether Biden had asked the Kremlin to put an end to supposed repressions. Rejecting the insinuations, Putin said that Washington had no real grounds on which to complain.

“America recently faced some of the hardest events in its history, after the murder of an African American and the creation of the whole Black Lives Matter movement,” he pointed out. “I will not comment on this now, I just want to say that the things we saw – pogroms, violations of the law, and so on – we sympathize with the Americans and the American people, but we do not want this to happen on our territory.”

He went on to say that Russia had watched the events of earlier this year, when protesters stormed the US Capitol building in support of former President Donald Trump, closely. (RT)