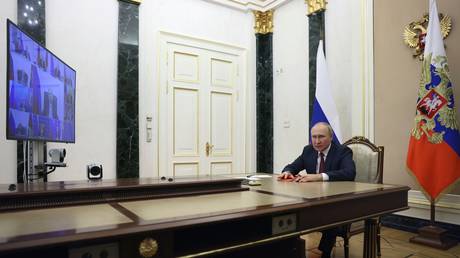 Russian President Vladimir Putin chairs a meeting with members of the Security Council via video conference call at the Kremlin in Moscow, Russia. ©  Sputnik / Gavriil Grigorov

Russia’s adversaries in the West are willing to create crises and unleash violence anywhere in the post-Soviet world, Russian President Vladimir Putin claimed on Thursday.

Addressing a meeting with the heads of intelligence for the Commonwealth of Independent States (CIS), Putin said Russia’s “geopolitical adversaries” are prepared to turn any country “into a ground zero of a crisis,” and to unleash “bloody massacres.”

“We also know that the West is devising scenarios for inciting new conflicts in the CIS. But we already have enough of them,” Putin said by videolink.

He pointed to the current military confrontation between Russia and Ukraine, as well as “what is happening on the borders of other CIS countries,” an apparent reference to recent border clashes between Armenia and neighboring Azerbaijan, as well as between Kyrgyzstan and Tajikistan.

All such conflicts have resulted from the collapse of the Soviet Union, Putin said, noting that this was “understandable.”

“We are seeing the difficult process of the forming of a more just world order,” the Russian president said. 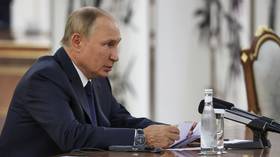 Putin has long spoken about the end of the so-called “unipolar” world dominated by the United States and its allies. In his infamous speech at the 2007 Munich Security Conference, he slammed Western leaders for deliberately eroding trust and said that a unipolar system was “not only unacceptable but also impossible” in the world today.

Earlier this month, during a meeting with his Chinese counterpart Xi Jinping, Putin said Western attempts to preserve the existing world order “have taken an absolutely ugly form lately.”

The idea of a new “multipolar” world has been discussed in the West, too, most recently by German Chancellor Olaf Scholz, who told the World Economic Forum at Davos in May that he hopes for “more multilateralism” and “more international co-operation.”

Following Moscow’s offensive in Ukraine, however, the West declared its intention to “isolate” Russia and imposed unprecedented sanctions on it. Russia views these actions as another manifestation of Western attempts to “contain” it and maintain the existing world order. (RT)