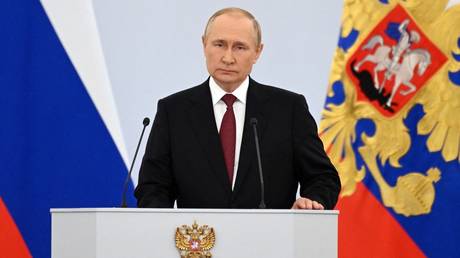 The Russian president’s most recent address proclaimed an updated vision for the country Dmitry Trenin is a Research Professor at the Higher School of Economics and a Lead Research Fellow at the Institute of World Economy and International Relations. He is also a member of the Russian International Affairs Council. Russian President Vladimir Putin © Grigory SYSOYEV / SPUTNIK / AFP

During his four terms at the helm of the Russian state, Vladimir Putin has made many landmark speeches. Several of them stand out as pivotal points in Moscow’s evolving foreign policy course.

Back in October 2001, addressing Berlin’s Bundestag in German, Putin proclaimed Russia’s “European choice”. In February 2007, speaking at the Munich security conference, he lashed out at America’s global hegemony and laid down Russia’s own terms for relations with the West. In March 2014 in the Kremlin, Putin welcomed Crimea and Sevastopol joining Russia, thus expanding the country’s borders for the first time since the break-up of the Soviet Union.

His most recent speech, also delivered in the Kremlin’s St. George’s Hall, merits special attention as a foreign policy manifesto which today charts a course of systemic opposition to the West.

The most striking feature was how little time it devoted to Ukraine – apart from its four former regions joining Russia. There was no mention of Moscow’s key demands, such as Kiev’s neutral status, demilitarization, and denazification. There was no comment on the latest developments on the battlefield, where the Ukrainians have seized the initiative, pushing the Russian forces to a defensive posture for the first time.

Instead, Putin’s central theme was Russia itself. He came closer than ever before to repudiating the dissolution of the Soviet Union in December 1991 by the leaders of the Russian, Ukrainian and Belarusian republics. Putin said that those politicians had flouted the will of the people who just eight and a half months prior had overwhelmingly voted in favor of keeping a renewed Union.

Read more:   How humans are altering the tides of the oceans

The Russian president then claimed that people have an inalienable right to self-determination based on their historic identity. The proof that he produced was the groundswell of support for the idea of the ex-Ukrainian regions joining Russia, expressed via the referendums held in Donetsk, Lugansk, Kherson and Zaporozhiye. 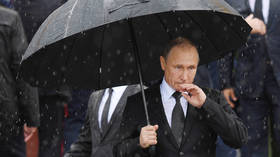 Timofey Bordachev: Russia’s conflict with the West leads to questions over the value of military and political alliances

2022 sees the undoing, in part, of the catastrophe of 1991 – such was the message. Coincidentally but symbolically, this year has also witnessed the passing of some of the key co-figures related to the documents that dissolved the USSR: Ukraine’s Leonid Kravchuk, Belarus’s Stanislav Shushkevich, Yeltsin’s eminence grise Gennady Burbulis, as well as the man whom they sought to outflank, the first and last Soviet president, Mikhail Gorbachev.

Putin, who just a few days before his Kremlin speech addressed an audience in Novgorod, the cradle of our country’s statehood, standing in front of the monument to the “Millennium of Russia”, was closing the books on the last three decades of that history, and opening a new chapter of consolidating the Russian world as a political entity. With the sculptures of Peter the Great and Catherine II looking on, he was preparing to make history.

Re-uniting the divided people of Russia and gathering the lands where they live is essentially the core element of the new Russian idea that Putin is offering to his compatriots. The immediate task of course is to integrate the new territories that have just joined Russia following the referendums. This requires a major effort in many areas and at various levels. It is anything but easy.

Russian forces, which for months have been advancing on Ukrainian territory, suddenly find themselves in a situation where they have to abandon some areas which are now legally Russian land, populated by Russian citizens who just voted in the referendums and now face severe reprisals at the hands of the counter-attacking Ukrainians.

Next comes the need to rebuild the cities and villages ravaged in the war, repair damaged infrastructure, restart the economy, provide communal services, and re-organize public administration, health services, and education.

Of paramount importance is socializing the millions of residents of the four regions who were automatically granted Russian citizenship, in the Russian national environment. Moscow has some experience of that from 2014 when Crimea and Sevastopol joined Russia, but doing this in a wartime situation is more challenging. A lot will depend, of course, on how the Russian forces cope on the frontline that passes very close to Donetsk and Kherson, and which still leaves the city of Zaporozhiye in Ukraine’s rear. 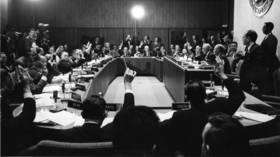 Dmitry Trenin: Russia and the US still have time to learn the lessons of the Cuban missile crisis and prevent a nuclear war

Even if the Ukrainian counter-offensive runs out of steam and the Russians resume their advance, none of these tasks can be accomplished quickly. This part of the new Russian national idea will keep the nation busy for a long time.

Putin’s concept, however, doesn’t stop there. It is not so much about restoring the Soviet Union: in Putin’s words, such a restoration is not Moscow’s objective. The Baltics, the South Caucasus and Central Asia are probably not envisaged as part of the new construct. However, as Foreign Minister Sergei Lavrov hinted on the State Duma floor, in future other Ukrainian regions might be given the chance to follow Kherson and Zaporozhiye.

To Putin, Greater Russia is a distinct civilization which opposes not only America’s hegemonic policies, but also the West’s projection of its values as universal. This is an about-face not only from Gorbachev’s musings about a common European home, but also from Putin’s own travails in trying to forge a Greater Europe from Lisbon to Vladivostok, and his efforts to find a way for Russia to join NATO.

A Greater Europe didn’t happen; a Greater Asia that includes Russia is de facto emerging. As to a Greater Russia, this requires more than a leader’s imagination.

The Soviet Union, as the living generations remember it, was very much the product of the Great Patriotic War. The hybrid war with the West, of which Ukraine is only a small part, will doubtless reshape Russia. The question is, will it also transform it to fit the vision of a powerful economy and a vibrant society, faithful to its declared values – the substance, rather than the form of a Greater Russia. (RT)