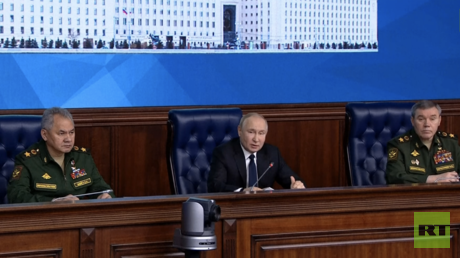 Moscow is confronted by the military capabilities of “almost all major NATO countries,” the Russian president has said

Moscow is well aware of the role that NATO is playing in the Ukraine conflict, Russian President Vladimir Putin said on Tuesday. He urged senior defense officials to carefully analyze the capabilities provided to Kiev by the US-led military bloc.

Speaking at an extended meeting of the Board of the Russian Ministry of Defense, Putin said that Russia is facing the “military potential and capabilities of almost all major NATO countries” in Ukraine, adding that this will not stop Moscow from achieving its objectives.

He went on to say that “all information about NATO forces [and] the means which are actively being used against us during the special military operation, are well known,” and that all of this should be “carefully analyzed and used” in order to increase the combat capabilities of Russia’s armed forces and security agencies.

He also said that the Russian forces have acquired a great deal of combat experience during the conflict. He called on senior defense officials to “analyze and systemize it in a timely manner” in order to share what has been learned with military personnel.

Earlier this month, Putin blasted the West’s policies of shipping weapons to Ukraine and accused the West of fueling “genocide and terror in the Donbass,” saying it is turning Ukraine into “a colony” and “is cynically using the Ukrainian people as cannon fodder, a battering ram against Russia.”

NATO has claimed that while it supports Ukraine militarily, it is not a party to the conflict. In early December, however, Foreign Minister Sergey Lavrov accused Washington and NATO of direct involvement in the conflict. (RT)