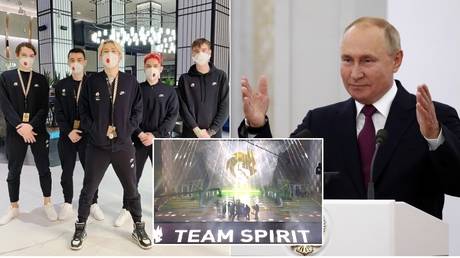 Team Spirit overcame rivals from PSG.LGD – a team linked to French football giants Paris Saint-Germain but based in China.

In a tense grand final the National Arena in Romanian capital Bucharest on Sunday, the score finished 3-2 to Team Spirit after their opponents had threatened a comeback from 2-0 down.

At the end of a ruthless Grand Final that kept us all on the edge of our seats, @Team__Spirit were able to overcome @PSGeSports, and now hoist the Aegis of Champions as the winners of The International 2021! #TI10#Dota2pic.twitter.com/97KoEIUb7k

WHAT A STORY, WHAT A RUN, WHAT A DREAM!#SPIRITIX#SpiritDota#TI10pic.twitter.com/WB3ZYCx1in

The feat has come to the attention of the Kremlin, with Putin extending a congratulatory message on Monday.

“I congratulate you on the well-deserved victory at The International 2021 – the Dota 2 world championship,” read a statement.

“For the first time in history the Russian team from the club Team Spirit won this prestigious competition. Well done!

“On the way to the final, you demonstrated outstanding leadership qualities and solidarity, and in the decisive battle, which became a real test of skill and character, you managed to concentrate and seize the initiative from strong opponents at the most crucial moment.

“You have proven in practice that our eSports competitors are always goal-oriented and capable of conquering any peaks.

“I wish you continued success and all the best.” (RT)