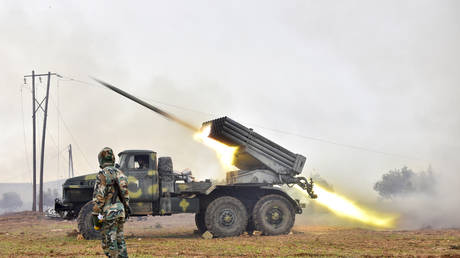 Russian President Vladimir Putin and his Turkish counterpart Recep Tayyip Erdogan talked Syria over the phone, as their troops squared off in Idlib province. The topics of Syrian sovereignty and terrorist threat loomed large.

Putin expressed “serious concern about the ongoing aggressive actions of extremist groups,” and emphasized the need for “unconditional respect for the sovereignty and territorial integrity” of Syria, the Kremlin readout of Friday’s phone conversation said. Moscow and Ankara agreed to “intensify bilateral interagency consultations on Idlib,” along with intensive military contacts.

It wasn’t clear how that would translate on the ground in Idlib, where Turkey keeps sending troops and tanks.

Ankara’s redout provided to the Turkish press says that Erdogan told Putin that “Assad regime’s actions and the consequent humanitarian crisis must be stopped in Idlib.”

Speaking to reporters in Istanbul ahead of the phone call with Putin, the Turkish leader said there will not be a truce unless the Syrian forces stop their “cruelty.”

“Unless the regime stops the persecution of the people of Idlib at this point, it is not possible to withdraw from there,” Erdogan said, according to Daily Sabah.

Also on rt.com Erdogan says Turkey will not withdraw from Syria’s Idlib until attacks by Damascus stop

Idlib is the last remaining stronghold of militant groups that once sought to overthrow the Syrian government, with the backing of Turkey, Saudi Arabia and the West. The dominant force in the province is Hayat Tahrir as-Sham (HTS), an Al-Qaeda affiliate previously known as Al-Nusra.

Over the past month, the Syrian army has dealt a series of defeats to the militants, liberating the last occupied suburbs of Aleppo and unblocking a strategic highway to the coast. Turkey responded by sending troops and weapons into the province and manning “observation posts” established under a cease-fire agreed years ago. Moscow has pointed out that the same deal required Ankara to separate “moderate” rebels from terrorists, which never happened. (RT)