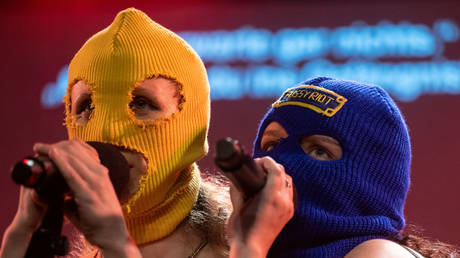 Members of the Russian activist group Pussy Riot were detained in the Swiss town of Koeniz on Monday evening. The three women – Maria Alyokhina, Lucy Stein, and Taso Pletner – were taken to a police station “in handcuffs” after spraying graffiti on a wall next to a road, the group said on Facebook.

The cantonal police confirmed the “temporary arrest of three Russian nationals” but provided no details about their identity for data protection reasons. The officers showed up at the scene after receiving a report that individuals were spraying graffiti, and discovered the three with spray cans in their hands, Swiss media reported.

Pussy Riot stated on Facebook that they sought to stage an “anti-war action” by spraying graffiti with the word ‘war’ and the distance between Switzerland and Ukraine to apparently remind people that “war is not far away.” They also claimed that they successfully did the same in other European cities. The activist group said the police had told them the three women could “face a fine and… even deportation from Switzerland.” 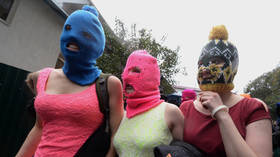 The police, however, released all three following brief questioning, and even escorted them to their hotel. Olga Borisova, another member of the group, confirmed they were released in the early hours of Tuesday. Law enforcement also contacted the owner of the wall, a police spokeswoman said. The owner could potentially file a complaint over the actions of the activists, Swiss media said.

Read more:   Türkiye lambasts US for 'bullying' own ally

Pussy Riot garnered international notoriety in 2012 when members were arrested after performing a provocative punk rock song in Moscow’s Cathedral of Christ the Savior. Three members, including Alyokhina, were sentenced to two years in prison on charges of “hooliganism motivated by religious hatred.”

The group is currently on what it calls a “European tour.” Last week, the Russian Embassy in Bern protested the fact that some Swiss venues are providing the activists places for their “performances” – which usually include “obscene actions that are beyond any decency” standards, as well as insults against Russia and its leadership, the embassy said in a statement. These types of actions are prohibited by Swiss law, which forbids public insults against foreign states and their top officials, it added. (RT)