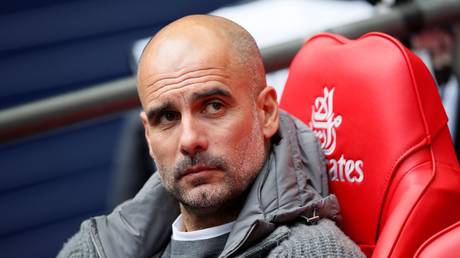 Pep Guardiola’s spell in the blue half of Manchester could come to a premature end after reports in the English press say that oil-rich French champions Paris Saint-Germain are preparing an audacious swoop for the Spanish coach.

Guardiola has a year remaining on his current deal with the reigning Premier League winners and has recently intimated that he “100 percent” intends to stay on as boss at the Etihad Stadium, but this assertion doesn’t appear to be dissuading PSG from considering a massive contract to tempt him towards the French capital, according to reports.

PSG’s owners Qatar Sports Investments are understood to be preparing a massive contract package for Guardiola, per a report in The Express, and hope that he can be encouraged to leave the English game after what will almost certainly be his least successful season in English football.

Also on rt.com ‘He’s something else’: Haaland nets 20-minute hat-trick on Bundesliga debut as wonderkid helps Dortmund to comeback win

Guardiola’s family returned to Barcelona last summer where his wife operates a fashion business and while this could conceivably be an obstacle to him extending his contract in Manchester, he says that he remains “100 per cent committed” to the club.

“It’s not because we have won the last two games,” Guardiola said recently. “Even if it was going bad, I’m not going anywhere.

“No manager wins all the time. I enjoy working with these players. We’ve lost some games so it is simple, we need to work out what we can do better.”

PSG are in a commanding position at the summit of Ligue 1, eight points clear of second-placed Marseille, but continued failure to reach the latter stages of the Champions League has led to something of a managerial merry-go-round at the club.

Current boss Thomas Tuchel has won more than 75 percent of his games in charge of the club so far but it is thought that another season of drought in the Europe’s most prestigious competition could signal the beginning of the end for the German – as it did previous managers Unai Emery, Laurent Blanc and Carlo Ancelotti. (RT)