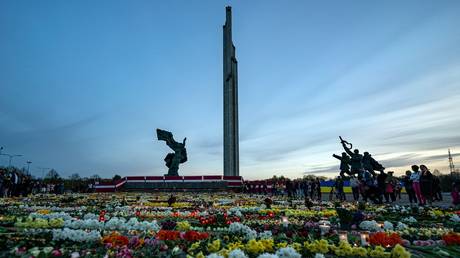 Several hundred people attempted to gather outside Riga’s town hall on Friday as the legislature in the Latvian capital convened for an extraordinary meeting to consider demolishing a monument to Soviet soldiers who liberated the city from Nazi occupation. The move was ultimately supported by an overwhelming majority of lawmakers.

Three members of the Latvian Russian Union party, including the party’s co-chair and member of the European Parliament Tatiana Zhdanok, were briefly detained during the protest outside the town hall. Technically, the politicians were not protesting as they were seen holding placards warning citizens that the gathering had not been authorized by the authorities.

All in all, seven people were detained during the demonstration for a variety of offenses, including “petty hooliganism.” Some wore black-and-orange St. George’s ribbons, which were used on Soviet WWII victory medals, and were detained for displaying unspecified “symbols of glorification of military aggression” in public. 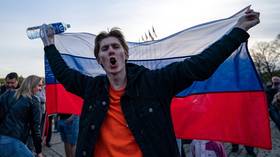 More protesters showed up in the city center after the decision to demolish it was approved by 38 legislators, with only eight voting against it. Those opposing the demolition of the monument were confronted by supporters of the move, Latvian nationalists and pro-Ukrainian activists. While opposing protesters engaged in verbal spats, no physical confrontations were reported from the heavily policed city center. (RT)