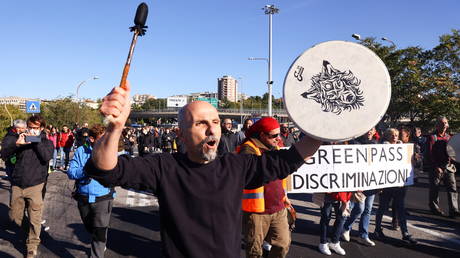 Several thousand people staged a rally at the port of Trieste on Friday to protest the Italian government’s decision to make coronavirus health passes mandatory for all workers, which went into force on that day.

The port of Trieste, which is the seventh-largest in Europe and a key oil terminal in the Mediterranean, remained functional on Friday despite the dockers earlier threatening to completely block its operations.

While some colleagues remained working, a crowd of some 2,000 people, according to local media estimates, gathered outside one of the entrances to the port to once again decry the Green Pass mandate.

According to the new rules, all workers in Italy have to be vaccinated, recently recovered from the coronavirus, or have a fresh negative test to be able to do their jobs. Those without the Green Pass will be suspended without pay and fined 1,500 euros if found to be still working despite not having one. The government papers seen by Reuters suggested that some 15% of private and 8% of public sector employees in Italy are currently lacking a health pass.

The people in Trieste, many of whom were sporting yellow vests and carried slogans, reading ‘Freedom’ and ‘No to Green Pass, no to discrimination’, acted peacefully and didn’t try to stop the cargo truck from getting into the port. (RT)