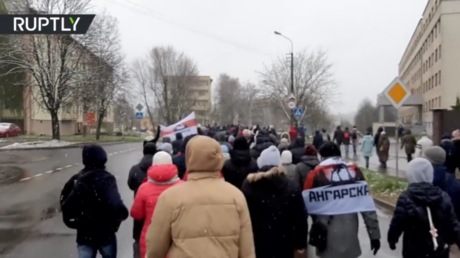 Thousands of protestors have again taken to the streets in Belarus, days after the country’s president pledged he would resign once a new constitution is in place.

Footage emerged on Sunday of crowds of demonstrators marching through Minsk, as well as other cities across the troubled Eastern European nation. In one dramatic clip that social media users claimed was taken in the capital, a police officer is attacked from behind as authorities chase activists down the road.

Photographs from the country also show the nation’s top riot police, OMON, pursuing protestors on foot and making arrests. The world’s media has become reliant on the Telegram messaging service and other local sources since international media organizations were banned from Belarus.

Weekend protests have become a regular occurrence since August, when veteran leader Alexander Lukashenko claimed victory in a presidential election, which the opposition and many international observers claim was rigged. Hundreds of thousands have participated in marches, boycotts and strikes, calling for a fresh vote.

On Friday, Lukashenko told journalists that he would stand down after a new constitution was ratified. He added that “with the new constitution, I will not work with you as President.” He has previously said that a transition of power before the document was finalized would be a “disaster.” At the time, Russian President Vladimir Putin welcomed the commitment and said that reform on this basis would be “logical, timely and appropriate.”

When a vote might be held on the matter is still unclear, but it could take place next year. Lukashenko’s comments were perceived by many as the strongest indication that he might step down since the crisis in the country began, as the declaration came just a day after a visit from Russian Foreign Minister Sergey Lavrov. Moscow’s top diplomat used the occasion to bring greetings from the Kremlin and to ask the Belarusian leader not to forget “the promises made to Vladimir Vladimirovich [Putin] in Sochi.” This was interpreted by many as an insistence that the transition of power goes ahead. (RT)