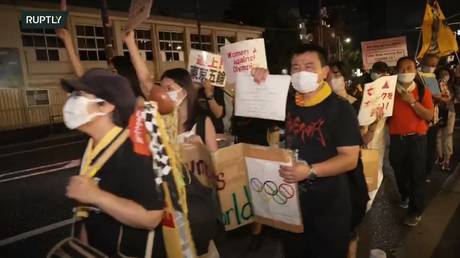 Protesters have taken to the streets of Tokyo to voice their anger at the Olympic Games, which formally open in the Japanese capital on Friday.

The delayed Games are going ahead despite Tokyo being in a state of Covid emergency and public sentiment remaining strongly against the event.

According to reports, the protests on the streets could be heard inside the Tokyo Olympic Stadium – where no spectators were present – during the Opening Ceremony.

Protesters carried banners reading “Cancel the Olympics!” and “Olympics kill the poor” while chanting “No, no, IOC!” in reference to the International Olympic Committee (IOC).