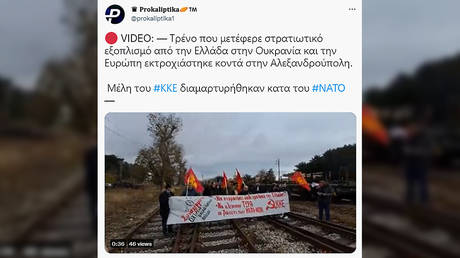 A group of Greek protesters gathered near a train carrying NATO equipment that derailed on Friday. The demonstrators were rallying against the presence of US military bases in Greece and the involvement of Western countries in the Ukraine conflict.

The train went off the tracks near the port of Alexandroupolis in northeastern Greece. According to local media, it was heading to the Balkan and Baltic states as part of NATO’s campaign to ramp up defenses against Russia. It was transporting tanks, armored vehicles, and a number of containers.

The accident happened when the train was moving at a slow speed, and a wheel on one car leaned to the side due to the heavy cargo and slipped off the track, local media reported. Following the accident, cranes and other equipment were moved in to salvage the military hardware. There have been no reports of any injuries or damage to the equipment.

Read more:   WHO: Booster dose should be given to protect most vulnerable persons

According to footage posted to social media, roughly a dozen people held a protest close to the train. The participants cried out a slogan: “Alexandroupolis is the port of the people, not the stronghold of the imperialists.” 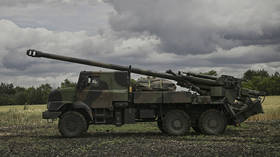 “No participation in the war in Ukraine” and “let the military bases and the Americans get out,” they said.

In May of this year, Greek Foreign Minister Nikos Dendias claimed that the port of Alexandroupolis would play a crucial role in supporting the US military presence in the country. Moreover, amid the Ukraine conflict, the city has become a key hub for US forces, who have been using it to deliver war material. In August, The New York Times reported, citing unnamed US officials, that the equipment was meant solely for use by American units on NATO territory, and not for Ukraine.

The new demonstration comes after this past spring Greek railway workers refused to transport US and NATO armored vehicles from Alexandroupolis to the borders of Ukraine, with several activists throwing red paint on the Western equipment. (RT)