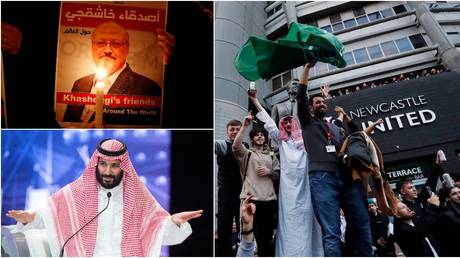 A protest against the murder of journalist Jamal Khashoggi is set to be held on Sunday near St James’ Park as Newcastle United play their first Premier League match under their new Saudi ownership.

Over £1,000 ($1,375) has been raised to launch the poster van protest, which intends to be a reminder of the 2018 murder and dismemberment of the former Washington Post columnist at the Saudi consulate in Istanbul, Turkey, which saome reports have alleged was ordered by the Crown Prince Mohammed bin Salman.

And while the Premier League’s other clubs have reportedly expressed anger at the authorities for not consulting them on the deal, others are taking matters into their own hands to have their voices heard on matters such as alleged human rights abuses by the Gulf kingdom.

Thanks to everyone who donated. We’ll have a large poster van circling St James’ Park and central Newcastle on Sunday for the clubs first home game under their new management. pic.twitter.com/xXVodPRWJt

On Twitter, organizer Blair McDougall thanked those who had helped to raise the money and confirmed that the van bearing Khashoggi’s image would also circle Newcastle City center.

Moving forward after tomorrow’s protest, it is said McDougall wishes to raise enough funds to rent a permanent space near to the iconic ground St James’ Park where Newcastle will face a visiting Tottenham Hotspur side.

Hatice Cengiz, Khashoggi’s fiancee, urged the Premier League last month to “say no to murder” and not allow the PIF’s purchase to go ahead.

Three years of your absence Jamal and justice is yet to be served.Three years on, yet the murderer remains free. Your famous phrase keeps me going — “Some die to remain.”You’ll remain alive in my hearts and the hearts of millions until justice is served. #JamalKhashoggipic.twitter.com/C5OO5G1kMo

“Only a few days after the third anniversary of Jamal’s murder, it is horrifying to learn that the Crown Prince is on the brink of getting what he wants: to wash his reputation, and sully the name of sports,” she explained to The Telegraph on the eve of the takeover.

“I ask what has now suddenly changed? There is still no justice for Jamal’s murder.

“I urge the Premier League not to cave in now – this is the moment to show courage and principle. It will show the killers they cannot wash away their crimes. The League needs to lead by example for football fans and all people to say no to murder,” she finished.

But cave in they did, and now Newcastle United head into a new era tipped by Liverpool boss Jurgen Klopp to become a “superpower”, while virtually unopposed save for tomorrow’s poster van action.

13:52 Azerbaijan to strengthen control over allocation of subsidies