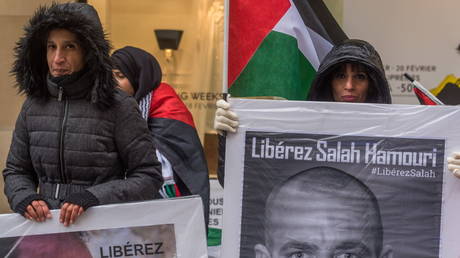 Salah Hamouri has joined dozens of prisoners who are protesting the Israeli practice of indefinite detention without charges March for the release of Palestinian prisoners in Lyon, France, 2018 © Getty Images / Robert DEYRAIL / Contributor

Franco-Palestinian human rights lawyer Salah Hamouri, who has been held by the Israeli authorities without charges for more than half a year, joined a mass hunger strike earlier this week. The name of Hamouri, who is both a Palestinian and French national, appeared on a list of 30 prisoners who recently announced their protest against the Israeli practice of administrative detention.

The Palestinian protesters, held in prisons across Israel, announced they would go on an open-ended hunger strike from September 25, in a statement published by the prison branch of the Popular Front for the Liberation of Palestine. Claiming that the Israeli authorities were unsuccessfully trying to dissuade them from staging a strike, the protesters said that they expected more prisoners to join the action.

Hamouri, 35, who was born to a Palestinian father and a French mother, used to work at the Addameer Prisoner Support and Human Rights Association. He was arrested on March 7 and has since been held in prison on undisclosed grounds. Hamouri’s case got prominence not only due to his professional activities, but also his French citizenship and his controversial past. Previously, he was sentenced to a significant prison sentence for his alleged role in a plot to assassinate a chief rabbi. In 2011, Hamouri was released in exchange for the Israeli prisoner of war Gilad Shalit. 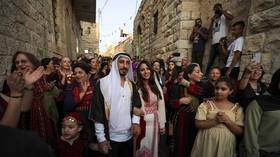 On September 26, the day after Hamouri joined a hunger strike, Amnesty International (AI) revealed that he had been transferred to a higher security prison.

“He had denounced his arbitrary detention in a letter to [French President] Emmanuel Macron on July 14. The Israeli authorities are making him pay the price,” the AI said.

Claiming that Hamouri “has been harassed by the Israeli authorities for more than twenty years,” the human rights organization has called on the French authorities “to ensure that the rights of this French citizen, lawyer and human rights defender are no longer violated.”

Administrative detention is a long-standing provision that has allowed Israel to hold suspects on the basis of “secret evidence” for indefinitely renewable six-month terms, without charging them. According to the Addameer, 743 Palestinians are being held by Israel in administrative detention – the highest number in six years. Some of them have been imprisoned for years. (RT)