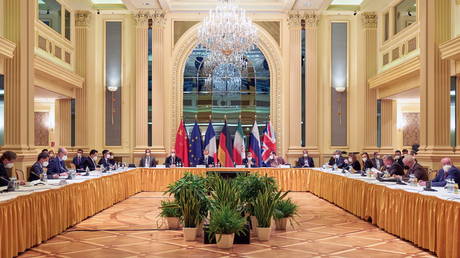 A meeting of the JCPOA Joint Commission in Vienna, Austria April 17, 2021 ©  EU Delegation in Vienna / Handout via REUTERS

International talks to rescue the 2015 Iran nuclear deal have progressed and the original signatories are now clearer about how to get the US and Iran to comply, representatives of Russia and China have said.

Two weeks of indirect talks to revive the deal – known as the Joint Comprehensive Plan of Action (JCPOA) – have taken place between the US and Iran in Vienna, with other signatories to the accord acting as mediators.

“Today the Joint Commission of #JCPOA took note with satisfaction of the progress made in negotiations to restore the nuclear deal,” Mikhail Ulyanov, the Russian ambassador to the International Atomic Energy Agency (IAEA), said in a statement on Tuesday.

Tehran and Washington have been at loggerheads over the deal, with each party calling on the other to first make concessions before acting themselves, and the talks were launched as a renewed effort to see them both return to the agreement.

Read more:   'You don't need to completely isolate any more,' Sweden to tell elderly amid country's relaxed handling of Covid-19

Ulyanov confirmed all delegations will now take a break from talks until early next week to allow them to “do homework and consult with the capitals.”

China’s envoy to the IAEA, Wang Qun, told reporters that “productive work” towards a final document had taken place, with the lifting of sanctions against Iran still the top priority.

Abbas Araqchi, Iran’s top nuclear negotiator, said the talks are moving forward but warned that Tehran could still pull out of the efforts to revive the JCPOA.

“The Iranian delegation will stop the talks whenever the process of negotiations leads to unreasonable demands, waste of time and irrational bargaining,” he was quoted as saying in state media. (RT)

Azerbaijani Embassy in Georgia has released a statement on the incident in Dmanisi, Report informs.…

15:00 WSJ: Bill Gates leaves Microsoft Board amid probe into prior relationship with staffer

14:40 ‘I drink cow urine every day. That is why I do not have Covid right now’ says Indian ruling party politician

14:39 Putin sees no alternative to trilateral agreements on Karabakh – Kremlin

14:01 Scale of Armenian vandalism in liberated Azerbaijani lands is terrifying and striking in its cruelty – Israeli expert

12:52 Barcelona may sack its head coach

12:39 Remittances from Azerbaijan to Georgia more than triple