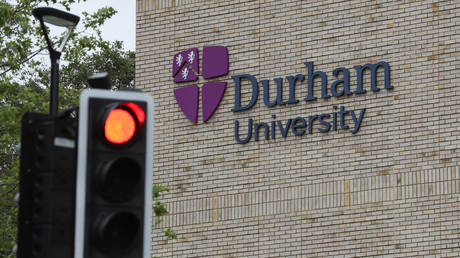 A red traffic light is pictured next to Durham University in the UK. September 16, 2020. © Reuters / Lee Smith

A British university professor is under investigation after he called a student walkout, which was staged over a guest speaker’s allegedly racist and transphobic address, “pathetic.”

Professor Tim Luckhurst, who heads Durham University’s South College, made the remark when the students walked out during the controversial speech by right-wing journalist Rod Liddle on Friday. He also reportedly shouted “at South College, we value freedom of speech!”

Liddle, who works for The Spectator magazine, had accused the political left of ignoring science when it came to transgender issues. According to The Telegraph, he also argued colonialism is “not remotely the major cause of Africa’s problems” and claimed that institutional racism was not to blame for underachieving black students. Students apparently shouted “disgusting!” and “racist!” at Liddle as he left the venue later.

Although Luckhurst emailed students to apologize, the university launched an investigation into his conduct over the weekend, as a “matter of urgency.” While “categorically” disagreeing with Liddle’s comments, school authorities noted that they were “concerned” about the “behaviours exhibited” during the evening, which fell “short of those that we expect.”

Luckhurst has reportedly been barred from official duties and placed under a gag order regarding the controversy. The university’s student union has reportedly stated his position at the institution was “untenable” while the University and College Union, which represents lecturers, said it was “utterly appalled.” (RT)