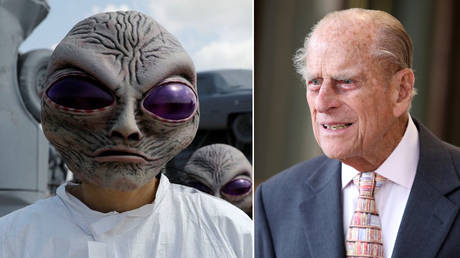 British royal Prince Philip has a long-running obsession with aliens and UFOs which was sparked by Lord Louis Mountbatten writing an official report about a strange encounter with a spaceship on his estate.

The Queen of England’s husband has reportedly spent decades building up a trove of books on extraterrestrials. The fascination developed after Mountbatten made an official report about a bizarre experience one of his employees allegedly had with a silver spaceship on the grounds of his Broadlands estate in Romsey, Hampshire.

“Mr Briggs was still dazed when I first saw him and was worried that no one would believe his story,” Mountbatten wrote of the 1955 incident. “Indeed, he made a point of saying that he had never believed in Flying Saucer stories before, and had been absolutely amazed at what he had seen.”

Philip is said to keep a map of UFO sightings on a wall in Buckingham Palace. He also reportedly asked to see top-secret Ministry of Defence reports into “close encounters.”

The 99-year-old spent last summer reading ‘The Halt Perspective’, a book which examines the inside story of the infamous Rendlesham Forest incident, which is sometimes dubbed “Britain’s Roswell.”

The episode saw a series of reported sightings of unexplained lights in December 1980. Two officers from the nearby Woodbridge US Air Force base even claimed to have encountered an unknown triangular craft displaying “hieroglyphic symbols,” which accelerated away at high speed after they touched it. (RT)