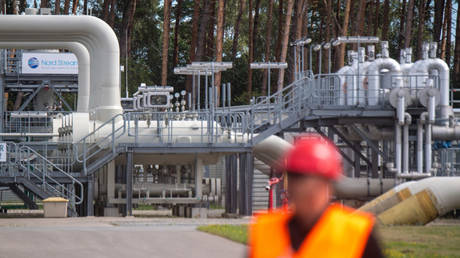 Pressure in the Nord Stream 2 undersea gas pipeline, which was intended to pump gas from Russia to Germany, dropped from 300 to 7 bars overnight, a spokesperson for the pipeline’s operator said on Monday, as cited by Reuters. The company reportedly does not know the cause of the drop.

“An emergency on line A of the Nord Stream 2 gas pipeline. Tonight, the Nord Stream 2 onshore site controller recorded a sharp drop in pressure in line A,” a spokesperson for Nord Stream 2 AG stated, adding that “The coast services of Germany, Denmark, Sweden, Finland and Russia were immediately notified.”

According to the statement, an investigation is underway. The Swiss-based operator, also noted that the leak, if that was the cause, could not have been at the landing point in Lubmin, northern Germany. “If it were in Lubmin, you’d have heard it,” the company’s spokesperson told Reuters.

The Russia-owned pipeline was intended to double gas supplies to Germany and despite opposition from the US and some EU states, the German government staunchly defended the project. In September 2021, Russian energy giant Gazprom announced that the construction of the pipeline which started in 2018 had been fully completed.

However, in February Berlin put the launch of Nord Stream 2, both lines of which had been filled with gas and were ready for operation, on hold indefinitely.

Many German politicians have been urging the Bundestag to change its stance and make use of the pipeline, which has an annual capacity of 55 billion cubic meters, to help Germany cope with energy shortages.

Last month, the vice president of the Bundestag, Wolfgang Kubicki, called to activate the pipeline “as soon as possible” to fill European gas storages ahead of winter. He pointed out that the gas via Nord Stream 2 is “no more immoral than the one coming via Nord Stream,” saying: “It’s just a different pipe. There is no sound reason not to open Nord Stream 2.”