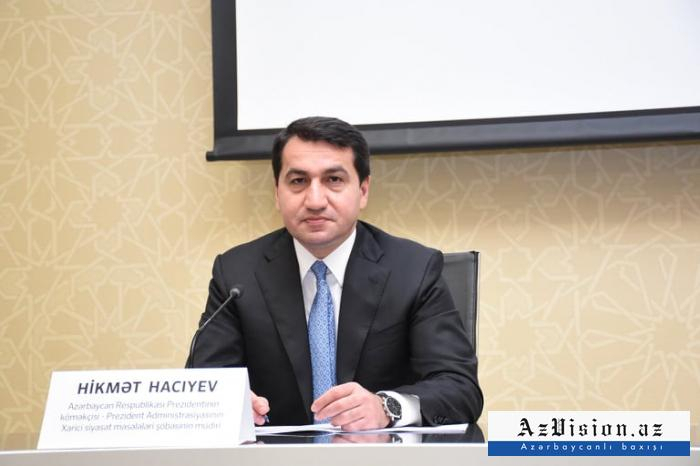 Assistant to the President of Azerbaijan – Head of the Foreign Policy Affairrs Department of the Presidential Administration Hikmet Hajiyev has commented on the use of military uniforms of the State Border Service of Azerbaijan by Armenian servicemen.

“The Armenian Ministry of Defense has disseminated photographs of the head of this structure with servicemen. A barefoot armenian soldier in military uniform similar to those of State Border Service of Azerbaijan, was sitting next to the Armenian minister of defense,” Hajiyev said. “A few minutes later, the press service of the Armenian Defense Ministry deleted these photos.”

According to Hajiyev, news about the deployment of PKK terrorists in the occupied Azerbaijani Shusha city, dressed in the uniform of the Azerbaijani Armed Forces, was also disseminated in foreign media.

“A little earlier Armenia prepared an amateur video about foreign mercenaries in military uniform of the State Border Service of Azerbaijan, it was presented in such a way that mercenaries were allegedly fighting on the Azerbaijani side. Unfortunately, we must point out that without verification, some reputable media outlets have referred to this false information,” the presidential aide added.

The fact that Armenian soldiers in military uniform of the State Border Service of Azerbaijan were sitting next to the Minister of Armenia proves the fact that such “Bollywood” films are being shot under the leadership of the Armenian Defense Ministry, Hajiyev noted.

He also pointed out that the staged video of alleged “murder” of two Armenian prisoners of war on the territory of the Hadrut district is also a fake.

“Publication of this fake fact by the BBC, without carrying out serious checks, based only on the words of the author of Armenian origin, is seriously regrettable,” he said.

“The leadership of Armenia and the regime of the criminal junta have no moral and ethical framework. The Armenian side, dressing PKK terrorists and Armenian soldiers in the military uniform of the Azerbaijani Armed Forces, can organize their committing war crimes against the civilian Armenian population, and then, using all propaganda resources, will blame Azerbaijan for these actions,” he said.

“And the PKK terrorists, killed in combat conditions and dressed in military uniforms of the Azerbaijani Armed Forces, can be passed off as mercenaries, allegedly fighting on the side of Azerbaijan. We well remember how in 1988, with the support of the Committee for State Security of the USSR, the special services of Armenia organized pogroms in Azerbaijani Sumgayit city against the civilian population of Armenian nationality, under the leadership of the Armenian criminal Eduard Grigoryan, and then accused Azerbaijan of this. We’re trying to ensure that the civilian Armenian population living in the occupied lands of Azerbaijan remains vigilant in conditions when such potential provocations of the Armenian Armed Forces and the regime of the criminal junta take place outside of military facilities,” noted the presidential aide.

“As Supreme Commander-in-Chief President Ilham Aliyev noted, “We don’t deal with the civilian Armenian population of Azerbaijan. We’re ready to provide all the necessary humanitarian support to the civilian population and the Armenian servicemen wishing to go over to the side of Azerbaijan, based on the principles of humanism and the Geneva Conventions,” Hajiyev added.