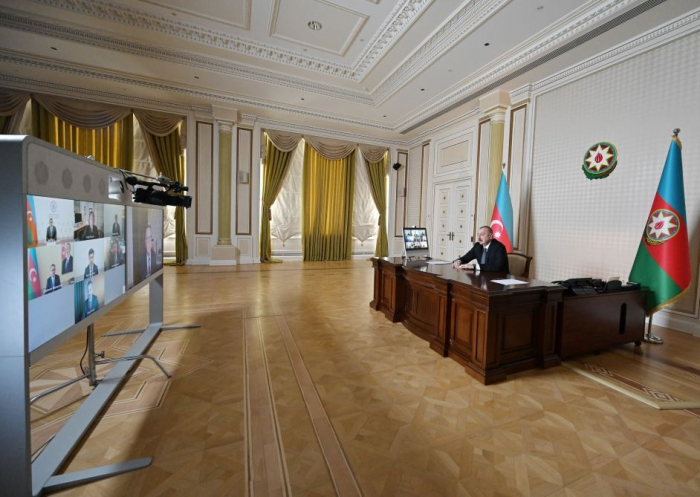 “We have major plans related to the modernization of energy infrastructure,” said Azerbaijan’s President Ilham Aliyev during a videoconference with CISCO’s Executive Vice President and Chief Financial Officer Kelly Kramer, Vice President Guy Diedrich and other executives of CISCO.

“You rightly noted that we used your remarkable equipment to organize two important events. I can say that from a technical point of view, both events went well, although it was not easy. While the Summit of Turkic-Speaking States covered only a few countries, the second event brought together more than 40 participants. International organizations were also present there. By the way, the Non-Aligned Movement and the European Union participated in one event together for the first time. This had never happened before. Azerbaijan initiated these two important international events. Of course, both of them were associated with coronavirus and the fight against it at the international level. I can tell you that technical support was excellent. Thank you for this opportunity. We are currently using this opportunity to speak to you. By the way, I can tell you that I have spoken with colleagues, i.e. heads of state, several times using your excellent system. However, this is the first time I have talked with company executives in this way. I think it is a pleasant coincidence that this happens to be CISCO,” said President Ilham Aliyev.

The head of state noted that this demonstrates a very close and strategic partnership between our countries.

“The first company I have such a conversation with represents the United States. In fact, let me tell you that I received a letter from President Trump yesterday. He congratulated me and the Azerbaijani people on the upcoming Republic Day. In his message, President Trump writes that the United States and Azerbaijan have cooperated for nearly 30 years to strengthen international security, diversification of energy supplies and political reforms. In the letter, he emphasizes that our two great states will do even more work in the future. This is a very important manifestation of friendship between the USA and Azerbaijan. As for the issues you have mentioned, we have already discussed them before. I am glad that we have made great progress since our meeting in Davos. My team informs me that work in these areas, in particular in the field of the “Smart City” project we discussed, is going well. And now you have come up with the idea of a “Smart Country”,” said President Ilham Aliyev.

“It covers, as you said, education, cyber security, healthcare and, as we have already discussed, I would add agriculture and management of water resources. I will come back to this. However, I was first informed about your cooperation with Quantela. Of course, we fully support this. I think it would be very useful to do a full study of the agenda, a kind of a “roadmap” to develop the “Smart Country” project. After that, the picture will become completely clear. A plan of upcoming actions will be ready, the final result will be determined and we will know what resources will need to be collected to achieve that. In the current situation, “interconnected schools” and the support you provide to the educational program are very important, because I want to inform you that our schools and universities have been closed due to coronavirus since the beginning of March and definitely will not open until the end of the school year. We also need to see how the situation with the coronavirus will develop. Today it is under control,” said President Ilham Aliyev.

The head of state noted that the number of dead is very low and thanks to serious restrictive measures, the number of infections is relatively low.

“However, we can say that, like all countries of the world, we are now in the process of lifting the restrictions. Therefore, the possibilities for distance education are very important. If we have a system that provides full connectivity for all schools, this will be a great opportunity. In this case, as you said, Azerbaijan will become one of the leading countries. As for the issue related to cyber security, we have discussed it before. As we previously discussed and as I noted, the main goal on the new reforms agenda is to increase gross domestic product, create jobs and use innovative technologies for this,” said President Ilham Aliyev.

The head of state pointed out that in the current conditions of the coronavirus, these issues are very important because it is possible to say that the gross domestic product of all countries has been affected.

“At the same time, in four months of this year, our gross domestic product grew by 0.2 percent. We appreciate that this indicator is likely to drop next month. Things in the industrial sector are better. Growth in our non-energy industry exceeds 13 percent. Of course, coronavirus strikes at gross domestic product and jobs. We will certainly calculate growth of unemployment, but we have engaged a very serious economic and social package in the amount of 2 billion euros to prevent it. We are doing this to protect people who have lost their jobs in sectors of the economy that are completely closed today. For example, tourism. It is currently at zero level. In a word, these issues are of the greatest importance today. I believe we will focus on that. In addition to the issues just raised, I believe we can work in other areas too. I know that you are already in contact with us on issues related to digitalization of agriculture. In the current situation of the falling oil price, this sector will become one of the leading ones. Therefore, agriculture means employment, food security and exports,” said Azerbaijan’s president.

The head of state noted that to achieve tangible results, Azerbaijan must have a system of very serious electronic control over water resources.

“I have recently signed an order establishing a special state commission led by the deputy prime minister. It has already started to operate. Many ministers are members of this commission because we have suffered major losses. Last year we also faced a severe drought. It is expected this year too, though not as severe but it is an unpredictable phenomenon. Weather conditions change suddenly. Thus, the correct assessment of water resources, the determination of project priorities, electronic management of water resources and balance are the most important issues for us in the coming years,” said President Ilham Aliyev.

“As a result of its implementation, we will ensure control over water resources, management and equal distribution. One of the biggest concerns here is that when distributing water resources, local executive bodies sometimes do this in an unequal manner, as a result of which a group of companies gets an unreasonable advantage. This injustice, in turn, creates serious difficulties. Therefore, I believe that this issue can also be included on our agenda. Thus, we will have a clear idea of what work needs to be done in the future. I think that our discussion today has been extremely important and encouraging. Thank you once again for supporting these initiatives. In an effort to modernize our country, we held numerous discussions, and everyone understands that this would be impossible without modern technologies. Therefore, I think that everything we discussed today will be implemented because all our previously planned initiatives have already been implemented. Returning to water management, you correctly noted the issue of water losses. We also have such a problem. Sometimes water losses in Azerbaijan account for 40 or even 50 percent. We not only lose water, but also harm the soil, because it is washed out and becomes unsuitable for agriculture. I think that by joining forces and using your experience, we can achieve great success in increasing yields,” said President Ilham Aliyev.

The head of state pointed out that we have limited resources of fertile land.

“We must increase yields in order to provide ourselves with agricultural produce and increase exports. And this is possible only by using state-of-the-art technology. I believe that after the structure of a new format for our cooperation is officially determined, we should have a short-term implementation plan because we need these issues a lot. Security is the number one issue in the modern world. It includes the issue of energy security. Therefore, the importance of protection from cyber attacks will increase even more for us. Recently, during the pandemic, I took part in the opening of the “AzerEnergy” operational center. All operating systems, including SCADA, are functioning there. We have major plans related to the modernization of energy infrastructure. By reconstructing and renovating the existing power plants, we were able to achieve an increase in electricity production of at least 600 megawatts. In other words, by increasing efficiency only through resource optimization, we received large generating capacities. So this will be a priority for us, of course. With regard to healthcare, everyone understands that this is an important factor in the successful fight against coronavirus,” said President Ilham Aliyev.

He noted that along with all the restrictive and organizational measures, doctors treating patients play the key role here.

“Therefore, our healthcare system was restructured in the shortest possible time. We made our best hospitals available to patients with coronavirus. Currently, more than 20 hospitals are in use. I can say that the cause of high mortality in some countries is the shortage of beds in hospitals. They physically cannot accept all patients. In case of a second wave of coronavirus in Azerbaijan, we have enough additional beds. Thus, modernization of the healthcare system is more important than ever because no-one knows how long coronavirus will spread,” said President Ilham Aliyev.